Unboxing 02 // Warlord Games Strontium Dogs: The Good the Bad and the Mutie. 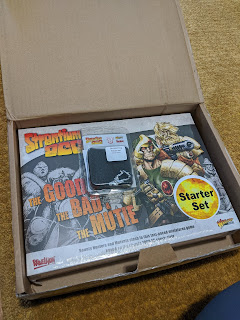 This one I have been excited for a long while. Strontium Dogs by Warlord Games - This game is set in an Universe designed by 2000 AD. For those not in the know Strontium Dogs is a skirmish tabletop battle game for two or more players set in the Strontium Dog universe defined by legendary comic creators John Wagner and Carlos Ezquerra. In it, Mutant Search/Destroy agents – the Strontium Dogs – are bounty hunters in a dangerous universe full of outlaws, pirates and corruption.
Players take control of a small team of bounty hunters or the outlaws, criminals and renegades they hunt in gun battles, chases and showdowns across the galaxy.

The box was pretty nondescript and thin brown card box. Inside was the game and a special edition version of Johnny Alpha. Of course I had to get the game opened and have a look inside.

The box itself is pretty thin and weak and to be honest will just become a display for me. The goodies inside will ultimately find new homes in carry cases. But what is actually inside?
So where to begin? Up first the rulebook it is a beautiful book, nicely coloured and written. Features some new gameplay styles I am not use to and will ultimately showcase in a future post. The main rules seemingly fill maybe ten pages, whilst the rest is gang designing, scenarios, playing a campaign and a lot of fluff pieces. We will ultimately come back to the book in a later post.

We then have a 12 page scenario booklet, to let you replay the story of Johnny Alpha versus Max Bubba. This story arc in the comic series was a big one and I want give away spoilers but it did upset a lot of readers when it happened and it broke my heart when I read it. But it basically starts of small and builds in complexities as you go along. These missions will be also showcased on here as I play my way through them so remember to check back. 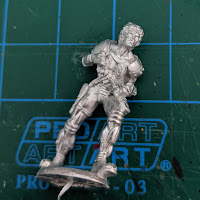 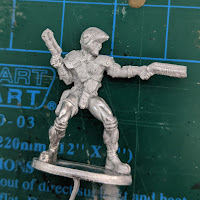 The miniatures. Now this is the important part, 8 beautiful miniatures are included in the game whilst a ninth comes free with the game. The first character of note is Johnny Alpha the main man himself. Now when you purchase the game you get the one in the set and the bonus special edition one. The game edition is a classic looking Johnny armed with two pistols and wearing his classic get up. This model will be a joy to paint, only negatives I have about this model are 1- the guns are rather thin and prone to bending 2- the bases are rather thick, am I meant to cut them off? They seem rather thick for that.

Then the special edition. This Johnny Alpha is ready to get down and dirty. Helmet is gone and his electro knuckles are drawn and ready to beat the bounty into submission. Once again it is a beautiful model with amazingly crisp details. The only negative I have to say is that this model doesn't have a different rule set compared to the above one. I would have liked to have seen a different set of rules for him. Maybe make him more aggressive and combat focused. But nice to have an option over what mini to use. 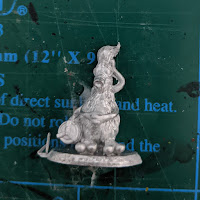 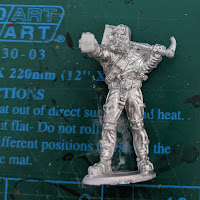 Then we have Johnny's side kicks. Up first the Gronk a tiny non violent alien who for game purposes sucks at fighting but makes for a great medic. From what I've seen you have to guard the Gronk in return for characters that will always stay in the fight. Then we have Wulf Sternhammer, a rare case in the Strontium Dog story. Wulf is not a mutant, but instead a time travelling viking stuck in the future. After a quick glimpse of the rules Wulf is seemingly a beast in combat and I think painting him up will be quite fun. 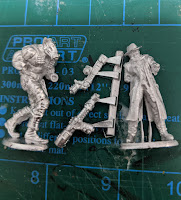 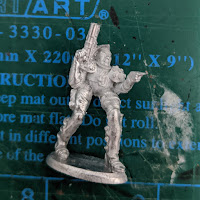 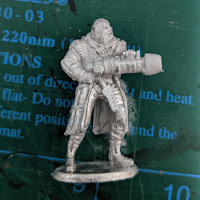 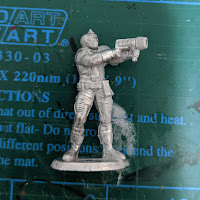 The Max Bubba crime gang! Five members in total meaning that to equal Johnny and Wulf they needed an extra three models. Up first is Bubba (bottom left), armed with a face like butter and a cannon that an eighties movie hero would be jealous of. Bubba is no Johnny but is an equal to Wulf, he will be fun to play, as I imagine he would sacrifice his gang to get away. Then we have Skull (bottom right) pretty straight up pistol welding merc and that he seems to be there to up the numbers. Low Down (top right) is a weird ass looking model with a shorter than normal torso, making him harder to hit, definitely going to be a strange painting experience. Then the last two models one of which is by far my favourite - Impetigo Jones (hat) he just looks like a classical wild west character with his wide brim hat and trench coat, stat wise a bit on the weaker side but I feel like he will pop some long range damage on the heroes when given the chance. Then finally Brute Mosley my favourite model in the box after Alpha. He is a god damn warthog with a blaster! To make him even more epic he is blue. Which will be an absolute blast to paint.

After the models we are left with an array of dice, cards and tokens. All which you will see when I start showcasing games on the blog. The final piece of the box is the terrain, this is a really big bonus to set and makes the box worth it's weight. The kit is ultimately made of laser cut mdf and is glued together using standard pva glue. First thing of note is the smell, damn the smell is strong. A real hit of burnt wood as the plastic is took off. For the most part the kit is super easy and apart from one piece it all went together beautiful. The hard piece to build is the generator rig, the annoying wind turbine on top had some of the thinnest pieces I have ever seen and sadly they broke in the process of pushing out the pieces, so you be careful! 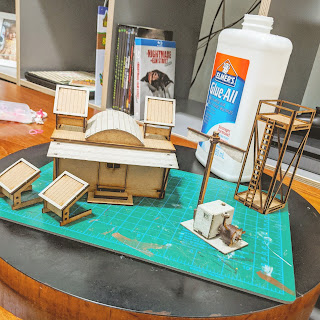 As you can see it built a small house/building, a generator, a watchtower and four solar panels. These are a great starter set and I fully plan on converting these up some more before painting. I want these to blend seemingly between the realms of Judge Dredd and Strontium Dogs. I want these to look a bit more scifi and far less modern day.

With these final pieces the unboxing is complete. Please do keep tabs on the blog as I wish to do some character profiles, painting posts and actual gaming posts. Let me know if you play below in the comments as I would love to find more players.
Posted by Adventures with Peps at December 12, 2019