Welcome back to the start of the week. This time I wanted to showcase some of my upcoming projects that I am working on. Now of course it had to Aeldari related and of course some Iyanden Craftworld. Before I list off everything let us get a picture up. 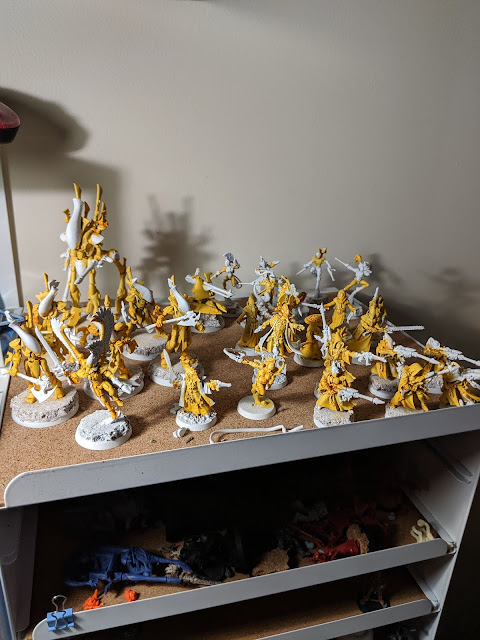 The current to do list contains:
Now the big question is do I side line some of these for Ynnari? It wouldn't need to be much to add some red in on them (helmets, robes, parts of armour), but is it going to be to much with the whole Yellow, Red and Blue. I know the good old eldar was viewed as the rainbow army but does that still stand now? I would love to hear your thoughts so please do drop me a comment below.

The non-craftworlders I am planning the following for- Harlequins I want to become the Veiled Path, they seem the best fit for a multiple reasons. Up first they love to meddle in everyone's affair, be it the Imperium, Drukari or Iyanden. Secondly it's the scheme, yellow, green and some brown will definitely blend into the overall colour palette of the forces.

Succubus - She is going to be a test scheme on what I may end up doing. I am looking to build a Wych Cult force with strong ties to Iyanden and will be called Cult of the Fallen Flame. The plan is for this cult to have been founded by an ex-persona of Yriel's past. Possibly a spurned lover you fell to her emotions. More on this to follow.

Then finally comes the Killteam, these are a long work in progress the ultimate goal is for these to represent Eldritch Raiders of the modern times. Even though Yriel is now High Admiral of Iyanden once more, it doesn't mean he still hasn't got his Raiders out in force searching for artifacts.

Let me know your thoughts what interests you and what would you like to see completed first.
Posted by Adventures with Peps at December 09, 2019