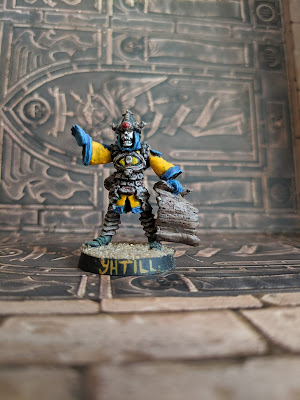 In the long abandon Ghost Halls of Iyanden few are untouched by the ghost warriors. Some have become accustomed to the death walking once more, some attempt to avoid them as best as possible and some believe the act to be of pure necromancy. Yhtill of House Ulthanash is a bit of pariah even among his own kin. Following the death of a love one Yhtill became obsessed with death and the art of the ghost warriors. Yhtill believed that if the body can inhabit a wraith body then why not a cloned form. Hidden away in an abandon dome, Yhtill experimented with clone and the transferring of a spirit into the new body. The experiment failed catastrophically causing Yhtill's love ones spirit stone to crack and crumble to dust.

The council of Iyanden sentenced Yhtill to exile and many believed that would be the last they saw of him. Unfortunately with the arrival of the Great Rift the Iyanden Council needed to recall as many of it sons and daughters as possible as it's seers saw only war in their future.

With the summon of Iyanden, Yhtill has returned, but he was forever changed. There are tales of his dealings with the Haemonculus of the Drukari and some have even mentioned much darker tales involving a Clone Master of the Monkeig. Whether these are true or not no one is sure. As Yhtill rarely speaks to anyone and is normally found in the Ghosthalls of Ulthanash, surrounded only by the most aggressive Wraithblades. Though never really trusted the autarch's have come to appreciate his aid in battle as it seems his guidance has led to his wraithblades being more agile and aggressive than any others.

Here ends the tale of Yhtill. A bit of a darker character than I would normally deem to make but I love the model and it needed this dark soul. The model comes from a 1980's Lord of the Rings Mouth of Sauron by Games Workshop. It was a true joy to paint and I hope you have all enjoyed reading his back story and hopefully I can get him on a tabletop soon.

As always drop me a comment and follow the blog. Thank you for reading.
Posted by Adventures with Peps at December 02, 2019