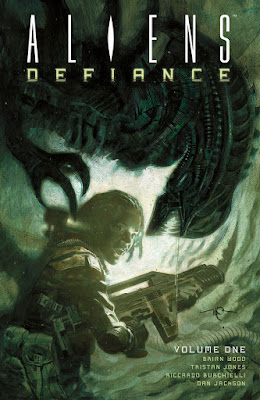 Wow I have gone down the rabbit hole with reading these xenomorph comics. This time I move onto a series call Defiance, the first volume I am about review, which contains the first six issues. I have no prior knowledge of this series so I am going in blind.

Commercial Fluff:
Colonial Marine Private First Class Zula Hendricks is battling demons from her past while fighting for her life in the company of Weyland-Yutani synthetics. In deep space she is forced to question her strength and loyalty when the discovery of an insidious alien species on a derelict hauler sends her on a dangerous journey across the stars. 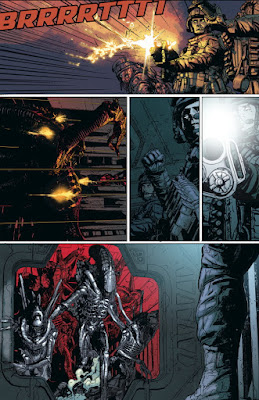 As already mentioned I have gone over the edge and have fully delved into the xenomorph Alien franchise. From what I can gather and have read the series is set between the first and second movies. First up I have to say like many xenomorphs comics this doesn't add anything new or even attempt to surprise us. It instead attempts to provide the readers with solid piece of story telling that's sole job is to entertain.

Early on you are introduced to the main character a Zula Hendricks, an AWOL Colonial Marine who's once promising career is brought to a rapid end, after sustaining a back injury in her very first combat mission. They pair this strong female character with an android called Davis 01, who is seemingly going rogue with his programming. This unlikely duo have managed to discover plans by Weyland-Yutani (classic villain of the Alienverse) to recover some xenomorph dna/bio sample. So they do what any normal human/android combo would do; they set out to stop the corporation and kill the Aliens themselves.

This comic is definitely an action comic, with to no surprises or suspense. It just seems to jump from action to action. Which really isn't an issue for me as it helps keep me interested. The artwork fits perfectly with the movies and is extremely dark, moody and scary. It really adds to story.

Overall this is solid read and I am already tracking down Volume 2!
Posted by Adventures with Peps at December 31, 2019