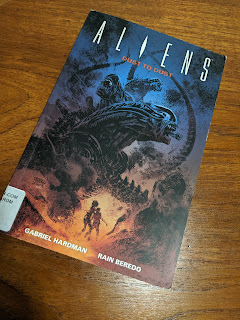 The xenomorphs are back and they are taking over the blog slowly! Today's bit of terrifying space horror comes in the form of a graphic novel titled Aliens: Dust to Dust.. Scary right? Well let's jump into the full details and go from there.

A mother and son bound by a shared terror--separated by an implacable alien force! A spaceship that should carry them away from the fear becomes a deathtrap from which escape seems impossible!

The Trono colony on LV-871 is under attack. Emergency evacuations are ordered. Twelve-year-old Maxon and his mom face the most terrifying creatures in the galaxy . . . Aliens!

It really seems like the writers struggle to move away from the classic story arc. Colonists meet facehugger, destroy colony and survivors flee whilst slowly being eaten/killed/captured one by one. But maybe that's actually what I want from a xenomorph story? This tale like so many others, sets us 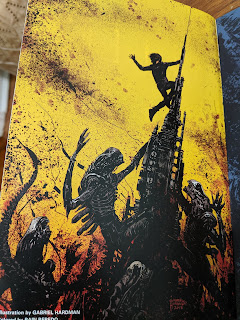 up on world suffering from a xenomorph takeover. The real scary part is that we are viewing it all from the view point of a twelve year old. That's right a twelve year, who wakes to find his mum's face covered by some weird crab like creature, whilst his city is filled with gun fire and burning. Imagine how fucked up you would be.

Overall the story though predictable is tense and scary, but if you get into the twelve year olds mind set it truly becomes terrifying.. The action is full on as the survivors go on the run. And it is all brought to life by the grim, dark and gritty artwork. Is it the best comic of my year....nope. but it is a solid worthwhile read.

Have you read it? Drop me a comment or become a follower to stay up-to-date with my postings. Thanks for reading.
Posted by Adventures with Peps at December 17, 2019