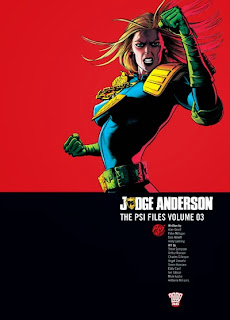 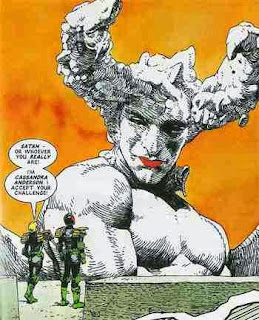 Recap
In the last PSI files; Anderson suffered some large emotional loses and as a way of coping with the pain she found relief in religion. But during an altercation which ended with her striking Judge Goon, she found her newly formed beliefs destroyed and debunked. Anderson reeling from all this, quits the Justice Force and decides to explore the galaxy and find herself again. On one remote world Anderson rediscovered her own Hope and headed back to a cold welcome home in Mega-City one.

Something Wicked- Anderson is getting re-assessed for active service, by Dredd himself. It won't be easy, as Dredd feels betrayed by how easily Anderson turn her back on the Law. During the re-assessment Anderson receives psi flashes leading her and Dredd to chase down Something Wicked.

Zoltan the Prophet - A sideshow crystal ball reader is predicting a meteor will hit Mega-City One. So with the aid of a multi billionaire Zoltan, they hope to lead there followers to nuTopia, a paradise world. But it seems their heads are full of demons.

Satan - An asteroid code named Icarus, has collided with the newly launched nuTopia ship (see Zoltan the Prophet), sending it straight on a crash course with The Cursed Earth. But was it an accident or on purpose and what else could be hiding out on Icarus? Can Anderson be the Champion of Mega-City One and stand before the might of Satan!

Real Highlight: Has to be the artwork. It is truly amazing and detailed. Satan looks imposing without being comical. Great work that really helps the story along.

The Protest - People are committing acts of self immolation across the city and it's up to the newly reinstated Anderson to work out why? I really enjoyed the way Judge Volt dealt with the problem by lifting the law against owning a Goldfish. Allowing each household to own a single fish without a permit. Such a Mega City One solution.

Wonderwall - Anderson has been back on the job for one week and unfortunately for her she reconnects with Judge Goon. Goon is process of dishing out his style of street justice on a gang of Juves. But hidden among the Juve is a girl called Layla. An abused and mentally broken child, Anderson has to enter her mind if she is to have any chance of saving the other children. The inside of Layla's mind is protected by the stories of Alice in Wonderland. My favourite page has to the full page spread of the White Rabbit tied up and gutted. Completely brutal but great image!

Crusade - Still reeling from the effects of the Alice Case, Anderson is struggling to believe how poorly the kids of Mega City One are being treated. But salvation for the MC-1 kids is at hand. When from the Cursed Earth a PSI force is released, showing images of Golden Angels above the city; the Juve crime drops by 80%! Kids are becoming pure again and Anderson starts to fear the worst and she is right to do so. Soon the kids are rising up and heading off into the Cursed Earth in search of salvation and love. As is the justice department's way they over react to the scenario and seen a hit team lead by Judge Goon to deal with the problem. Ultimately Goon and his team are killed, but not before he has caused more pain and suffering.

Danse Macabre - We are back on the streets with Anderson as she chases down a perp called Deek Chewsits. Deek chooses to hide out in the Danse Macabre Discotek Memorial. The artwork was too Manga for me, for the artist let down the strip in my opinion. For example, Anderson had massive over the rop eyes in this tale, like something from sailor moon and considering how deep and meaningful the last two stories were, this was a bit of a let down. Even if it is only a filler tale it could have been done with a bit more thought.

Witch - Anderson visits the Home for Retired PSI's to celebrate her old tutors 40th birthday. But what she didn't realize was that the two of them would help a witch die with grace 500 years ago in the past. Back to great artwork again which I'm thankful for. Highlight of this tale for me is Anderson's mentor Mishka Wallace. Having served her city during the Apocalypse War, she is now treated like an outcast and with utter contempt by the citizens she tried to help. Shows a sad lonely existence for PSI's and opens Anderson's eyes to her own future.

The Great Debate - Wrestling meets Philosophy in this all new TV show. Only problem is it is highly illegal to produce or watch as it is a fight to the death! Judge Anderson is using her PSI abilities to track them down and finally shut down this blood thirsty sport. I really enjoyed the character 'Big Daddy Plato'-Philosopher supreme whose values underpin all Earthly Civilisation. Winner of Thirteen straight fights and user of a laser sword. He is a massive fat guy with a white beard, in a toga (it just makes me laugh and I'm of making him for the mini game).

Lawless - During the annual 'A Dress the Citizens speech', Chief Judge Volt and his entourage are covered in what appears to be blood! It's up to Anderson to track down the protester known only simply as Lawless before he can pull anymore stunts. I quite enjoyed the scene when Lawless uses a sound system and holographic device, to bring alive the Eagle of Justice and make it proclaim: 'I am a symbol of Fascist oppression!' Great stuff.

Bonus Strips
Dear Diary - A written account from Anderson's diary. About how a criminal attempts to get revenge on Anderson. Though the story itself was fun and interesting, it sadly lack artwork and what artwork we did get was painful to look at and too child like. I understand what the artist was attempting, but I think I would have preferred just a good old script.
Confessions of a She Devil - Anderson is haunted by a dream of a Man-Pig. Following her hunches, she heads to a Male only club. Where the embodiment of Mother Earth is raining down vengeance on all of MANkind. The idea of male only clubs in the city of the future, seems amazingly outdated. But I guess in a World of no jobs, people get bored and revert to bad ideals and self serving beliefs. Interesting tale, but not one you'll remember in a hour.
Exorcise Duty - In this we strip we get to experience a different branch of the PSI department. As Anderson joins a team of exorcise Judges and attempts to stop a demonic summoning. It great to see Exorcists in action, I found them intriguing as a branch of the Justice Department and just wish there was more tales about.

With that last tale we come to a close with Volume 3.

Overall a great addition to the Anderson story line. The Satan stories were hands down the best strip in this edition. Made even better by the great artwork. I also enjoyed the whole Children arc and how it has affected Anderson and look forward to seeing how that progress. On the negative side, I feel like a couple of the single tales lacked depth and were quite forgettable sadly. Satan, Wonderwall and Crusade are the real highlights of this volume and are worth the cover price alone.
Posted by Adventures with Peps at December 03, 2019