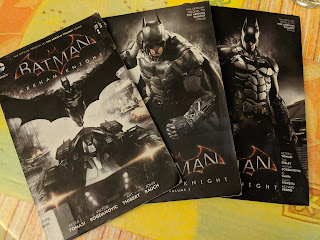 Taking a quick break from Judge Dredd comics to jump into the Batman verse. I happened to be in my local library when I noticed they had the entire Arkham series sitting on the shelf. So I took the opportunity to grab them all and read them back to back. Due to the fact that it is all one story I thought I would just combine them into one post. So sit back and enjoy. If you wish to follow hit up the link to the left or drop me comment below.

Commercial Fluff: The Joker is dead. Arkham City is closed. As a new day begins, Bruce Wayne finds himself in devastating pain, recovering from his injuries and questioning whether his role as Batman is still necessary to the city's survival. But as the sun rises in Gotham City, dangerous new threats emerge from the shadows...and the Arkham Knight is just beginning. Don't miss this in-continuity prequel comic set prior to the events of the brand-new video game Batman: Arkham Knight! 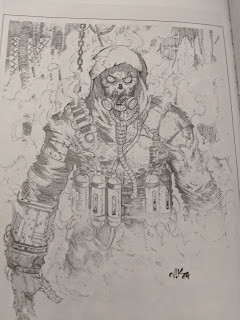 Quick story overview to start us off.

The Joker is dead! Big spoiler if you don't the games but it had to be said. Whilst the victorious Bruce Wayne is struggling to run his job and be Batman (no surprise there). Following the death of Joker a void has been created in the criminal world and everyone is trying to claim their part. Foremost among these is the Penguin, aided by Mr. Hammer and Captain Sickle the Russian clowns.

Along side the Penguin, we also get appearances from Harley Quinn, Killer Croc and Kid Shark. Then to round out the action we have a random mystery character dressed in some high tech armour would enjoys killing criminals - not completely sure who this is but I can only assume he will play a bigger role in the other comics.

The story itself for me is pretty dull, the artwork is nice but if I didn't have the other comics I doubt I would have picked them up.

Commercial Fluff: The prequel to the best-selling video game continues! 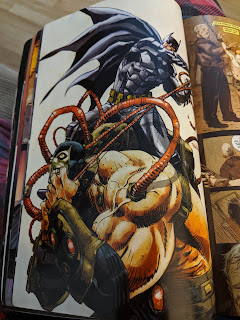 The Venom-fueled super-villain Bane has broken out of Gotham Stone Ridge Penitentiary, and this time he’s amassed an army of followers ready to overrun the city and install him as ruler of Gotham. To defeat him, Batman will need an army of his own, and he’ll stand shoulder to shoulder with allies and enemies alike to fight for their city.

But Bane isn’t the only threat facing the Dark Knight. While Jim Gordon runs for mayor as part of Bruce Wayne’s “Gotham Reborn” city revitalization plan, Harley Quinn and the rest of the Suicide Squad are after the billionaire’s head, as ordered by none other than the Penguin himself! And through it all, someone new is watching from the shadows.

The story continues and I would hope improves....spoiler - it does not. Following on from the first tale Bruce and Barbara spend a large amount of the comic convincing Commissioner Gordon to run for Major of Gotham. Though everyone knows he will do well, Gordon himself has constant doubts which verge on the edge of annoyance.

We then get a metric ton of villains dropped into the story - Bane steps up first being broken out of Gotham Stone Ridge Penitentiary. Then we get a Penguin and Harley mini adventure and we finish up with the entrance of Poison Ivy. This seems like a complete overkill but I can only assume all these characters end up in the computer game.

Then the comics go weirder, introducing the Suicide Squad to the mix in the form of Deadshot, Boomerang and Killer Croc. It then all becomes pretty complicated with double crosses, blackmail, bike theft and the Arkham Knight stirring up shit.

As a newbie to the Batverse in comic form this is all a bit to much to take in. I'm over half way through the series and this is now really dragging for me. 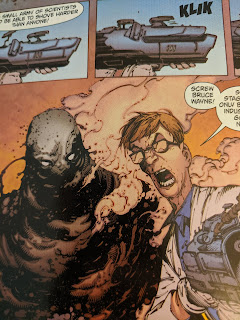 Back on the streets a mysterious enemy lurks in the shadows of Gotham, the Arkham Knight. Gathering super-villians like Harley Quinn, the Scarecrow, Bane and Two-Face, Batman must prevent a catastrophy and save Gotham.

I'm really struggling with this now. I am finding myself switching off and not actually caring anymore. The artwork is great but the story is a meh at best. Got to be honest I didn't finished this one. They lost me completely on this series and could be with ease one of the worst stories I've read this year! 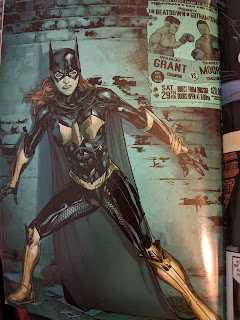 Complete garbage. Seriously regret picking these up and reading them. I feel like I like Batman, but these comics did him zero justice. It even made me not finish a comic, which is completely unheard of.

From what I can tell it added nothing to the computer game lore at all and it also seemed to move completely from any lore I know. So basic what I am trying to say is don't bother with this it is dull. Feel free to disagree below and thanks for reading.
Posted by Adventures with Peps at December 10, 2019