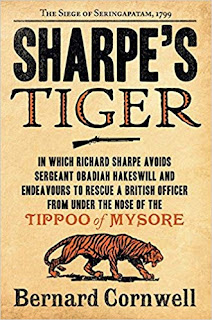 A slightly different tale than normal this week as my book of choice. This story heads back into earth's own history and focuses on a unlikely hero called Sharpe. Why did I pick up this book? Firstly I have fond memories of the TV series with Sean Bean, secondly is due to Geeky Jack and how passionately he enjoyed the story. So let us dive on in.

Commercial Fluff: Richard Sharpe avoids the tyrannical Sergeant Obadiah Hakeswill and endeavours to rescue a British officer from under the nose of the Tippoo of Mysore.

But in fleeing Hakeswill, Sharpe enters the exotic and dangerous world of the Tippoo. An adventure that will require all of his wits just to stay alive, let alone save the British army from catastrophe.

Soldier, hero, rogue – Sharpe is the man you always want on your side. Born in poverty, he joined the army to escape jail and climbed the ranks by sheer brutal courage. He knows no other family than the regiment of the 95th Rifles whose green jacket he proudly wears. 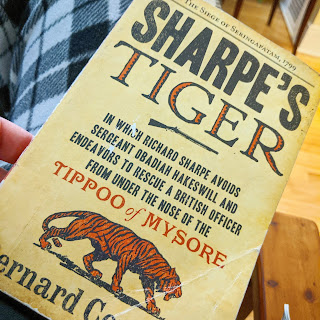 This is my first Bernard Cornwell book and it sure will not be the last! Richard Sharpe is a down trodden solider in the British Army. Growing bored of the constant marching Sharpe dreams of escaping the army and starting a fresh life else where. Sadly that isn't going to happen in this book.

Cornwell created a character you can't help but like. He is a classic anti-hero with valid reasoning behind his actions. Sharpe is also willing to do anything to get the job done, even if it means leaving a loved one behind. But no main character can act alone and lucky for Sharpe he has some amazing supporting characters. Up first is Obadiah Hakeswill, a lowly educated psychopath who will betray everyone to progress in the army and stay alive. Then we have the British Officers who lord it over the common man and who seem to be more of a villain than the actual villain. Finally we have the Tippoo of Mysore, a completely ruthless dictator who refuses to stand down in the face of the British Military. He is an amazing character and has some of the best sidekicks in the book, who wouldn't love men eating Tigers and killer strong men.. Yep smashing nails completely through a mans skull is disgusting!!

Overall an amazing start to the series and I highly recommend it. I am excited to see how Sharpe travels from India and the Rajah Wars to the end of the Napoleonic wars. So watch this space and make sure you follow my blog to stay up to date with what I am up to.
Posted by Adventures with Peps at December 13, 2019