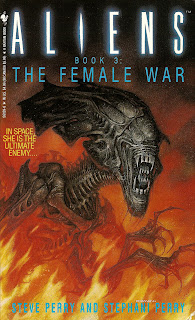 Told you I was picking up Female War straight after Nightmare Asylum. As I mentioned in the previous review there is just something special about the Alienverse and I just want to keep exploring it.

Commercial Fluff: A stunning novel based on the extraordinary universe as portrayed in the Aliens movies. The Female War features Ripley as a leader of humanity's forces against a new invasion where aliens have overrun the Earth--and the human population has been abandoned to alien appetites

Just like the previous title this continues the story of Billie and Wilks (ie. Newt and Hicks), sadly Bueller is now gone and has been replaced by the infamous Ripley. Without giving away to much I will give a quick run down of the novel.

The story kicks off on the lunar rescue station, with multiple people (inc. Billie and Ripley) reporting dreams of an alien queen. Ripley soon declares her plan of using these dreamers as a tracing device to locate what she believes to be the queen of queens. We are then treated to some great well thought out supporting characters who truly add to the story telling and genuinely have you concerned about them and whether they would survive. So what is the plan you ask? Well here is were I feel the storytelling goes a bit overboard. The plan has the dreamers locating the Queen of Queens and they go scoop her up before bringing her to Earth. Once her presence is felt all xenomorphs would be attracted to her and once all massed together they could be wiped out in one go. 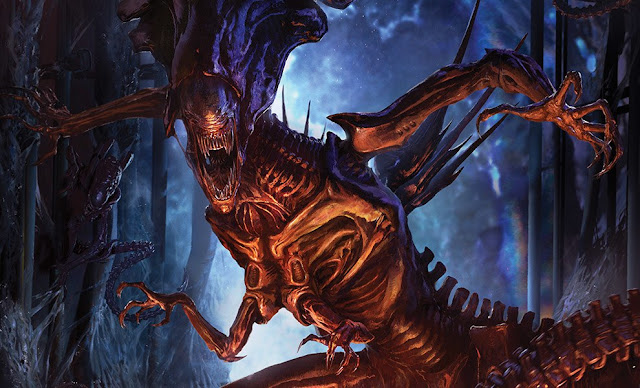 So Ripley, Billie, Wilks and the ragtag Dreamers (new band name), hijack a military fuel ship and head off to find the Boss Queen. The Queen's homeworld is a weird planet for sure, covered in a strange liquid and home to giant sized Drones. Drones that though bigger in size, fail to be anymore able to kill a person than a normal one. Seriously these drones get shot up and don't seem to hurt anything with their acid blood. We then get a nerve wracking chase/fight scene as Ripley lures the Queen on to the ship. Before all heading to the cyro sleep chambers and heading back to earth.

Here classic problems arrive for the heroes. Bombs don't work, aliens arrive sooner than planned, one of the main characters disappears to rescue a young girl. This is properly the worst section of the book due to it being rushed through. I feel the book should have ended at the time the Queen was captured and then given themselves more time on this section. But overall this is an okay book, the plot maybe a bit far fetched and rushed but it helps to continue the Wilks, Billie adventures. I now fear to say that this seems to be the end of Wilks and Billie saga, the next book has a new author and is set a whole generation later.

Personally I will be taking a short break on xenomorph front as I have a few Discworlds to get through but please realize there are a lot more to come! As always thanks for reading and if you have the time please hit the follow button or drop and comment below.
Posted by Adventures with Peps at December 06, 2019