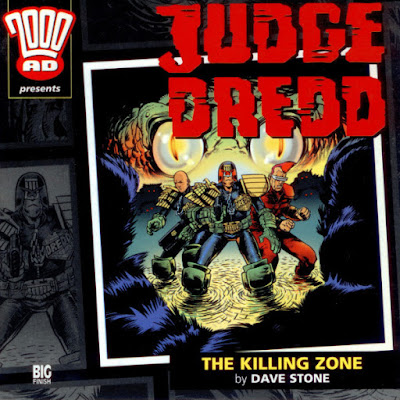 Welcome to a long over due Audio review. The last one was the Strontium Dog: Down to Earth, but for the last Judge Dredd audio book we have to go all the way back to July for it. So this story follows on from Dredd or Alive and actually introduces a character I really enjoyed from the comics; Judge Janus!

Here are the details:

Commercial Fluff: Bodies have been found throughout the city, each bearing the signs of being a victim of the Killing Zone - the illegal snuff-sport which has taken Mega-city One by storm. Half a billion people are watching this holo-vid slaughter - and with the Judges unable to stop these deadly games, the Justice Department's reputation is at an all-time low. The man behind it is turning the Law itself into a laughing-stock - and the Law must be seen to be served.

Now Judge Dredd is forced to resort to unorthodox methods and allies: a low-life Wally Squad operative with an attitude, and an erratic Psi Judge with an attitude even worse. Can he rely on them? Just how far can he trust them as they take him down into the dark? 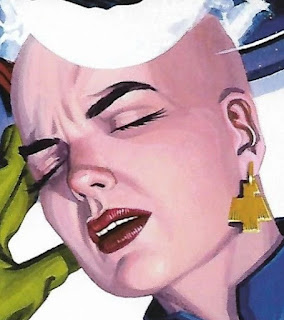 I really enjoy a Big Finish Production audio, just have a great way of bring the Big Mega to life. The sound effects, the news reports they just work great at sucking you into the world. The main story is pretty straight forward; Efil Drago San (a main villain from the Armitage series) has left Brit-Cit behind and is making waves in MC-1. Using his connections Drago is able to create an illegal holo-vid show Killing Zone. Basically a death trap maze filled with killers and dangers beyond compare, the viewers are then able to gamble and watch to see who will win out. But with most shows the thrill starts to wear off so Drago ups the anti by getting Dredd into the game.

Dredd on the other hand is working with a zany Wally Street Judge who doesn't use a gun, to discover the location of the Killing Zone and try to shut it down. Dredd knows he is up against it and also brings in the help of PSI Judge Janus to also help. In classic Dredd fashion, soon gunfire consumes all and the body count rises.

Efil Drago San - He is personally for me a great villain and crime lord, he rarely if ever wins but he manage to drag out a draw quite often.

Judge Janus - One of my favourite side characters. I remember when she had her own strip in 2000AD. Wonder what actually happen to her. Guess we need to catch up on the progs I've missed.

Sound - Big Finish do it again. Great sound effects drags you into the story and keep you there. No other studio has made MC-1 seem so real.

Story - A bit weak to be honest. Maybe just to straight forward and no real twists.

Janus/Dredd - Dredd is meant to distrust psychics and is even described as being slightly resistant to their powers. So I find it strange to have him so willingly allowing Janus to use her powers on him.

Wally Judge - Maybe it was the lack of background for him, but I found the character a little one noted and dull. Shame as I have a real soft spot for Wally Judges...Looking at you Lenny Zero and Dirty Frank.

Overall I found the piece a worthwhile listen and though other tales so far have surpassed it, it is still worth spending the time and listening to it. Now on to the next one.

As always I would love it if you dropped me a comment or hit follow. Thank you for reading.
at December 27, 2019

Beer Review 89 // Turbo Cobra Ninja by Beyond the Pale

Welcome back for another work brew review. Still stuck at home so haven't been super adventurous with my beer ordering. So I am sti...