It seems like forever since I posted about some Aeldari 40k models. But between renovating a house and having my 2nd child, I haven't had much time to just sit and paint. So here is my follow up guardian squad who ultimately join up in the story arc with Zhemon's Reckoning. Enjoy this short fluff on Ishasta's Rebirth - Guardian Defenders.

The origin of this squads title come from a time of great upheaval for the Aeldari of Iyanden. This squad can trace it's legacy to a time prior the empty, haunted halls of Iyanden, before the Great Devourer had stolen the lives of so many. Their tale begins in the War against Zhemon.

Hailing from House Ulthanash the original founders of this squad all railed to the call of war by then Admiral Yriel. Their goal was to was to safe guard the webway portal on the surface and ensure a means of escape if the worst was to befall the ground forces of Wraith Constructs and Seers. It was a thankless task and one that was never remember in the histories and unlike a lot of the forces involved the squad suffered no loses or even saw combat during the battle. This sadly led to feelings of remorse for a few members of the squad, who having aided the injured, felt guilty for not fighting alongside their brothers. Sadly these members quickly fell to the Aspect Shrines pull and became lost to history.

Now with the galaxy torn in two and a new God rising, this Guardian Defender unit is once again formed to fight the enemies of Iyanden. Still drawing from House Ulthanash citizens, who take it upon themselves to don the war masks and fight in honor of the original members. 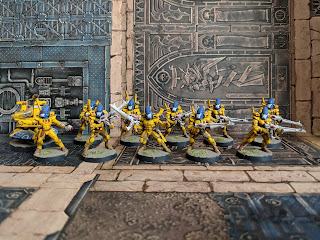 Let me know what you think of the fluff. No glories for squad just boring, thankless guard duty. Hope you enjoyed and if you are on Instagram hit me up @beerswithpeps or #miniswithpeps.

Cheers
Posted by Adventures with Peps at November 11, 2019