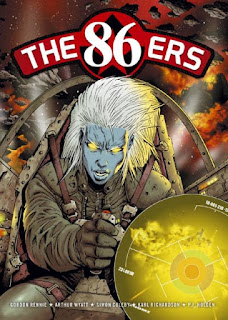 Following hot on the heels of my last review comes another Blue G.I review. This time set after the timeline of Rogue Trooper on Nu Earth we follow one of the G.I Dolls as she is reassigned to a new unit the 86ERs.

Before I go into my view let's get the details out of the way.

Commercial Fluff:
The Acoma System, a Souther-held warzone in their galaxy-wide conflict with the Norts. Centred around a gas giant, its once-rich moons make it a valuable mining site, and the job of protecting the regular supply routes falls to the 86th Air Support Reconnaissance Squadron – a dumping ground for every failure and freak.

Rafe is a G.I. Doll, a genetically engineered solider sent to Acoma to join the 86ers. There she struggles to fit in with the ragtag crew of misfits and rogues. But when Rafe stumbles across a deadly secret there is more than discrimination to face, because now she is fighting for her life! 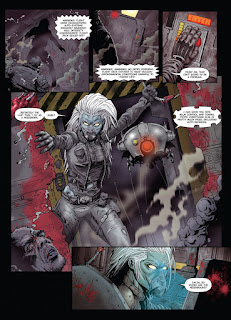 I'm glad that over the last few years 2000 AD have opened the doors to spin off in the Nort vs Southerners war zones. I'm also glad to see that it is a strong female character with a completely different skill set than Rogue.

The setting is on a space station called 'The Citadel' controlled by the Southerners. The Citadel hangs around a giant Gas Planet with wonderful asteroid belts to fight over. Here we are introduced to the 86ers a group of 'misfits' and 'rogues', basically if you are sent here you are on the naughty list and on a real career dive. This seems to be the case for Rafe, newly joined to the 86ers this G.I has to learn who to trust and quickly.

The great part of this comic is the large cast of characters. There are a lot to take in so here are the main crew.

Rafaelle Blue - The main character. Female G.I and a one of the new outcasts to form the 86ers.

Gabe - Robot side kick with a strange personality.

Commander Harrigan - Chain-smoking Squadron Commander of the base. 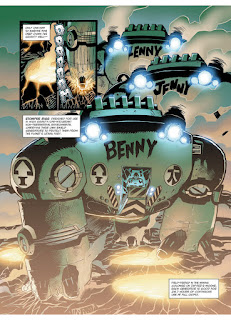 Elson - A womanizing fighter pilot who introduced Rafe to the Citadel.

Kristos - A Southerner PSI, treated with mistrust by nearly everyone.

Stalov and the Norts - Switched sides after their Klan attempted (and failed) in a coup. Treated with some mistrust.

Doctor Friedkin - A mysterious character who seems to be keeping progress of Rafe in the base. Originally a geneticist on the GI project, he turned to Xeno-Archaeology and an obsession with elder races after encountering a vast, biological alien ship in a jump gate accident.

Japeth - A mysterious alien hybrid who saved Rafe from the Nort base, although he apparently killed Rafe's robot Gabe.

Security Chief Montuez - Working with Friedkin in the conspiracy. He views Rafe as a "gene-freak". 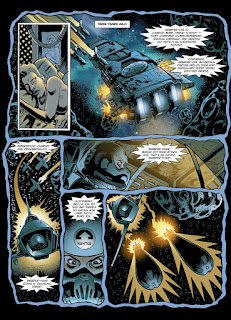 They all seem to be working towards different goals, which ultimately leads to their own survival. But some of them are up to some seriously crazy stuff. Example would be that the Southerners have discovered the remains of an Elder race, who not only once ruled the galaxy, but actually grew beyond it as well. Soon the galaxy spanning war of Norts vs Southerners means nothing compared to the ultimate threat of these Elder aliens being re-woken. I love the fact that these all powerful aliens are never really seen but the hints dropped into the story really makes you believe they are best left alone.

As with most 2000 AD strips the artwork is pretty and helps aid the story. The scenes set during the space battles are some of my favourite. It does seem like that the story left open for a follow up, I wonder if it will come to pass? I for one hope it does as I enjoyed this.

Have you read this? Drop me a comment below and let me know your thoughts.
Posted by Adventures with Peps at November 26, 2019