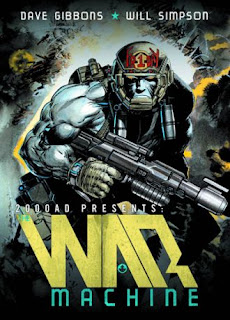 Welcome to a comic review. As you read this it is Nov 11th 2019 and it has been snowing all day! With that in mind I decided to read a comic I purchased last week called Rogue Trooper: War Machine. This e-comic celebrated it's 30 year anniversary and so 2000 AD did a 50% off deal so I had to get it.

Commercial Fluff:
They are the best of the best. Alpha Company, 1st Genetic Infantry, have been created for war. Able to survive in the harshest environments, each clone warrior knows how to obey orders.

Fight hard. Die well. But as the sole survivor of a brutal massacre, Friday starts to question those who have made him this way, making an uncontrollable war machine the most dangerous creature in the galaxy!

As the 1980s drew to a close, 2000 AD had decided to revamp Rogue Trooper and invited co-creator and original artist Gibbons back to re-visualize the character - but rather than draw the new series, he ended up writing it. It was his chance to put his own spin on the character. 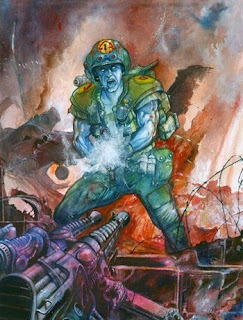 Debuting in Prog 650, War Machine ditched the bio-chips and turned 'Rogue' into 'Friday', a different genetic infantryman with similar origins who swears vengeance on the corporation that cloned him and his fallen buddies - Top, Lucky, and Eightball.

Will Simpson's artwork marked a clear departure from the black-and-white art that had defined so much of Rogue's previous incarnation, sitting easily alongside Simon Bisley's work on Sláine: The Horned God and Colin MacNeil on Chopper: Song of the Surfer.

If Rogue Trooper was partly inspired by Westerns and World War Two films, War Machine took its cue from Vietnam and Paul Verhoeven movies - a gritty, hard-edged and taciturn meditation on war, obsession, and identity.

So as a long time fan of the original Rogue Trooper strip, I had seen this comic kicking around for a while but had never took the dive. I wasn't sure what the story was actually going to be as I had never seen these ones in 2000 AD (pre-me being a reader). But when they discounted it by 50% I knew I had to pick it up.

The story is basically Dave Gibbons' retelling of the Rogue Trooper story, but in a version he felt it deserved. The big changes is Rogue is now called Friday, bio-chips are not a thing. Yep that's right Helm, Bagman and Gunner are no more. Though the characters exist in this comic, they are known as Top, Lucky and Eightball they don't survive the battle and death is their final act. The war has also taken a step back from crazy sci-fi into a more realistic sci-fi. The war for Nu-Earth is now a lot more violent and dark, which you will either love or hate.

Unfortunately for me some of these changes hurt the story telling. Without the bio-chips Rogue/Friday is purely out for his own motives, he doesn't have a counter pointing character. I use to love when the chips disagreed or forced Rogue to save someone. Rogue needs this otherwise he is just a dull lone wolf, seeking vengeance and nothing else. I feel this was a big miss by Gibbon on this tale. We also lack the humor of the original comic, mainly brought by Gunnar, but without his bio-chips Rogue/Friday is just a dull action hero and I ended up not really caring for him by the end.

The battles are a highlight for sure, which is great as most of the comic is action, action, action! The artwork is also crazy and beautiful and full of colour, whilst remaining dark and moody. But these just aren't enough to save it for me.

Guess what I am saying is.....glad it was 50% off and is a miss for me. Some how Gibbons made a character I loved and enjoyed into a two dimensional dull action hero. Have you read this comic? What are your thoughts? Did I miss something or did Gibbons miss something?

As always thanks for reading along!
Posted by Adventures with Peps at November 19, 2019