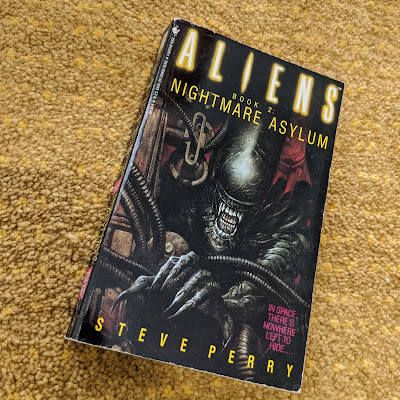 I am loving the Alien franchise at the moment, it is seriously competing with my Judge Dredd time which is great. I am finding that these tales appeal to my warhammer sci-fi needs without being grim dark, they are instead just horror dark. I feel like I am trying to say that they just more believe able. With that in mind we follow Earth Hive with the aptly named Nightmare Aslyum.

Commercial Fluff: Wilks, Billie, and Bueller were the last survivors of a devastating assault on the aliens' home planet. But once their return to the solar system made them refugees once more, fleeing Earth and its alien infestation in a desperate attempt to stay alive. Now, in an otherwise unmanned military transport, they hurtle through space. Destination: unknown. Little do they know that the cargo they carry with them is a legacy of death that they will ultimately have to face. Nor do they know that they head toward a remote colony and military outpost. This pocket of humanity at the very edges of space is at the mercy of a general names Spears with an agenda all his own. Now Billie, Wilks, and Bueller face a new nightmare, and it is nothing they could ever have imagined: a gift of madness from an alien world, unbalanced mind, and the experiences of a mysterious pilot named Lieutenant Ellen Ripley.

When the first book ended (Earth Hive), I was left feeling - "oh shit, well I guess everyone is dead. Goodbye human race", this of course is not true as Earth has it colonies and some of these even don't have xenomorph on them (though they seem rare). But it also left me with a hunger to read more, what happens next so I had to grab this book when I saw it. I was glad to see it was still Steve Perry at the helm which meant the story would continue as planned. And it did. The tale jumps in with Wilks, Billie and Bueller (well half of him anyway) on a space transport that has seen better days, heading to some unknown destination. What could possibly go wrong!?

A lot it turns out.

Up first Billie starts suffering from Nightmares that empathetic beings suffer when they can sense a xenomorph. Which sadly can mean only one thing, their transport has a few extra passengers. A search of the ship reveals a section that had been in lock down containing the remains of four once frozen infected humans. Sadly the presence of Wilks and Billie affected the machines and the bodies unfroze allowing the xenomorphs lose on the old tiny ship.

What follows is a terrorizing ordeal to deal with these creatures with only Billie realistically able to do anything as the other two are injured. I was seriously unnerved by the whole experience and this was a great opening to the book. I am not sure I would survive in a situation similar to this. Following this ordeal our trio are happy to discover they are reaching their destination a far flung military base with an attached mining colony.

All relief quickly passes as we meet General Spears a gene grown human with a pet xenomorph Queen! Spears has a dream of training Xenomorphs to carry guns, in the hopes of returning to Earth and using them to wipe out what he calls the feral xenomorphs... This man is crazy and to make matters worst he has fed all the colonists to the aliens, along with half his troops in order to make enough drone warriors!

What I like the most about the tale is how Perry handles it all, the aliens seem real, he gives them a realistic behavior and motivation which explains why they follow Spears, they also show how quickly they can turn when given the chance. Spears is a totally ruthless psycho which is always great in the villain, you just love to hate him. Wilks is continuing his journey of self worth and Billie is becoming a bit of badass mini Ripley if I'm honest. On the topic of Ripley, she barely made it into the book, I seriously mean barely. She is there for maybe two paragraphs, so don't buy into the back cover.

Is this the best book in the world...hell no. But the story is action packed and a fun read. More for a fan of the series than a just go grab and read. I shall now move on to the third book Aliens: Female War and see how we go.

Have you read this title? What are your thoughts? Let me know below and please sign up to the blog on the left side or follow me on instagram via @beerswithpeps
Posted by Adventures with Peps at November 29, 2019