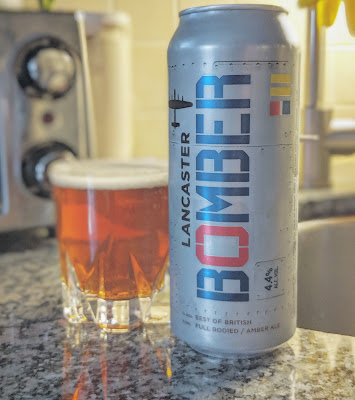 Whilst searching the beer selection at the local LCBO, I stumbled across a brew I have not had in a long time. Marston's Lancaster Bomber, I remember serving this brew in a few bars I once worked at back in the UK. So I picked up a few cans in the hopes of it tasting as good as I remember or if I happen to have a hazy memory of this brew.

This chestnut-coloured beer is brewed using pale ale and crystal malt, which gives it a full-bodied flavour. A finely balanced hop character is enriched by the late addition of Styrian Goldings to give a prominent floral hop aroma and fuller flavour.

Artwork: Dull to be honest, could have done or produced something a lot more fun. It definitely doesn't stand out on shelf.

Aroma: Malty sweetness and some floral and grassy hop notes. Smells like a real beer :)

Taste: A nice light fruit taste like raisin/current backed but by the expect malt notes of cereal and bread. A gentle carbonation assists the linger flavour note and bitterness that hangs on the tongue.

Would I buy it again: Yes. It's a tasty traditional ale, will blow your mind with it's flavour profile.. No. What it will do is give you a satisfying, thirst quenching drink that will let you enjoy your night without a hop burn or milk sugar coma. Go enjoy one and stop being a hop head for a minute.

Have you enjoyed this brew? Let me know below.
Posted by Adventures with Peps at November 27, 2019