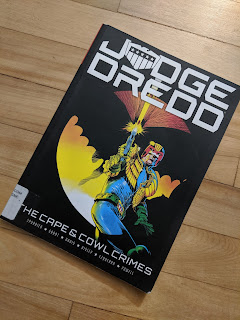 If you hadn't notice I am hitting up a lot of Judge Dredd Graphic Novels of late. The reason being my local Library (yes I use a library still), recently received about ten graphic novels. The theme for this one is the comical portray of superheroes in the MC-1 world, so with this in mind let us jump in.

Fairly Hyperman: Judge Dredd is approached in seedy bar by a muscle bound fool, declaring himself as Fairly Hyperman. With a crazy array of fairly super powers, this would be hero starts fighting crime in MC-1, braking multiple laws as he goes and seriously pissing off Judge Dredd himself.

Highlight: Seems like the Justice department has dealt with super heroes before (or at least read some DC comics), as they seemingly have a "fairly" well stocked rare mineral supply. Allowing Judge Dredd to take down this superhero, with specially crafted bullets. Overall this is a funny tale but ultimately seems a bit of a filler piece, though very was well done.

Bat Mugger: In a future were money is hard to obtain legally, some very intelligent people will do stupid things to fund their passion. So what you are failing artist when you are incredibly skilled at mugging and bat gilding.

Highlight: This is a great Judge Dredd tale and for a while it seemed like the main villain would get away with his criminal activity. But as is always the case he gets greedy and ends up on Judge Dredd's radar. Love a good bat-glider character and this one hits it out of the park.

The Juve Mutated Kung Fu Kleggs: Orphaned during the reign of Chief Judge Cal. Four baby Kleggs are raised by a Kook (crazy man), who looks to turn these killers into a crime fighting force. Unfortunately when his way to control them breaks (it was a ballerina music box), the Kleggs revert to their killer ways and are soon lose in MC-1. Which means only one thing....lots of dead citizens.

Highlight: The theme (ie. Ninja Turtles) is of course a great highlight and the artwork by Dermot Power really helps to bring it all together. It is highly detailed, with a dark moody back drop this is a thing of beauty. 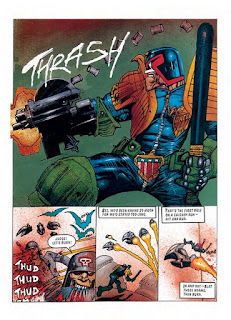 Chicken Run: When the local gang from Ozzy Osbourne block gets bored, the John Major Block geeks best beware. The gangers cover up their gang markings and go on a Chicken Run. The objective is to cause as much trouble and violence as possible before escaping and avoiding the law.

Highlight: One of the Ozzy Osbourne crew has a specially augmented jaw and chomps on the head of the batguilder. Feels like the story writer was an Ozzy fan.

Marauder: Ex-Justice Department Cadet Falcone has dropped out of the academy of law, due to an inability to follow orders, control his anger and flirting with the female Judges. Now free of the tight grip of law and back in his old hood. Falcone desires to take down the corrupt Judge who killed his mother. He will soon become known as the Marauder and manages to obtain some Hellbender Armour, the ultimate stealth and combat suit. Officially band on Earth!

Highlight: Skorps - The Wildest Street Gang in the Mega City One (according to this tale). They take their name from the Cursed Earth Rad-Scorpions that they get specially grafted on to their backs. Fusing their two minds into a single consciousness. This leads the gangers to gain an increase in violence and strength.

Codename: Weasel: A light hearted filler tale. After Judges discover one of Ex-Chief Judge McGruder's black ops sites. Dredd and a team are sent in to discover what happened at the site, instead they find the deadly and dangerous Weasel.

Highlight: Complete rip-off of the Wolverine movie. Quite comical and a worthy read. 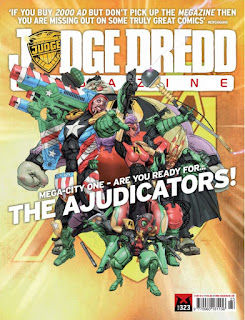 The Adjudicators: A missing PR Judge and a ton of stolen Justice Central video recording equipment seems to be in the middle of a new vigilante group, the Adjudicators. Basically a MC-1 rip off of the Marvel Superheroes group Avengers. To make matters worst these costume freaks are making Judges popular with the citizens! Of course Judge Dredd is not a fan.

Highlight: A PR department of Judges!? Beyond Judge Pal, I did not know of this department. More investigation is needed. To Google!!

Mask of Anarchy: Sadly this tale seems like it is halfway through a bigger story? Basically an anti-mutant artist has become the next target of Anarchy, a vigilante who is trying to expose wrong doing by the rich and powerful. Wish I knew more but I really don't.

Highlight: The anti-mutant graphic novel artist is exposed as actually being a mutant! Of course this does not go down well with the anti-mutant crowd and is nearly beaten to a pulp by the enraged group.

Uncivil Partnership: Last tale. The two biggest movies of the year are releasing on the same night at the same cinema. To complicate matters the headlining stars were once romantically entwined. Now the fans have taken sides and it seems a riot is going to breakout!

Highlight: Cosplay. Love watching Judge Dredd beat up the cos-player fans. It's easy to get to wrapped up in the fandom of a film and forget something is just a movie. The artwork is so fun on this one too.

I have mixed feelings on this graphic novel, firstly it jumps all over the timeline and it feels a bit too squashed together and forced. I understand the need and theme for the book and that is great but I do feel it could have been done better. Overall a good evenings read.

Until next time Drokk heads!
Posted by Adventures with Peps at October 23, 2019