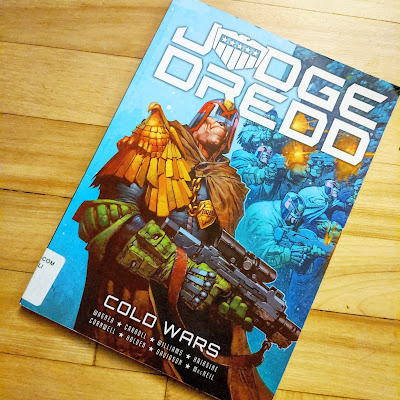 Welcome Dredd heads to another Judge Dredd comic review. After hitting up Titan in last review I decided to follow it up with Cold War. Why? I wanted to see what the fall out was from the Titan stories especially the fact that East Meg Two had taken a Ex-Chief Judge, so out of my own need for fulfillment I moved into these tales. Enjoy!

The Graphic Novel is broken into five tales. Get Sin the first was the follow up to titan, War Buds the second tale is a throwback piece to the Apocalypse War, Black Snow is a showcase of the West Spying on the East, Echoes is Dredd's past coming back to haunt him and Shroud is kind off his penance piece I believe. Hopefully it will all make sense at some point. I guess this is the issue with jumping a head in a story arc you miss somethings out. 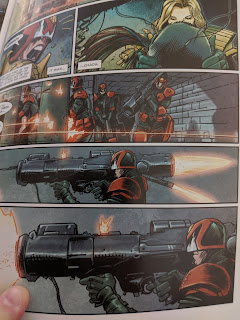 Get Sin - A follow up piece to Titan. Dredd leads a crack team into the Ural Mountains of Siberia. Their mission to avenge the 500 ex-judges (prisoners) deaths on Enceladus and the kidnapping of former Chief Judge Sinfield. We are deep within enemy lines with this tale, and it is interesting to see how the nuke wars effected other territories outside of North America.

War Buds - Wow a deep dive story here. We are rolling back the clocks to remember the Apocalypse Team (See case files 05 Part 3). The story follows the members that joined Dredd, Anderson and Hershey on a suicide mission to destroy East Meg One.

Sadly the other members of this heroic squad aren't doing so well and when one of their own is in trouble (earmarked for euthanasia) they embark on one last team mission to free him and escape into Texas City. Unfortunately for them Dredd is on this case.

Highlight - Quite a depressing tale. Even though we get a very rarely seen apology from Dredd, we still see a man who will always but the Law first.

Black Snow - A Soviet ore processing plant in Siberia has gone dark following a hostile takeover by the local tribal folk. Whilst Sov Judges are slow to react, MC-1 (who have been spying on the plant) rapidly send "assistance" with an armed task force lead by Dredd. Soon we have a three way battle with no true winners.

Highlight - The crazy paperwork Soviet judges have to comply with before an issue can be properly dealt with. It's hugely comical to read, not sure if it is based on fact? 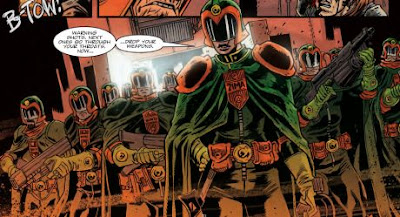 Echoes - This story follows on from Black Snow. With Dredd's task force attempting to leave Siberia. Unfortunately for them a Sov Judge has planted a mine on the Manta Craft causing it to explode and crash in the old ruins of the nuked city East Meg One. Unfortunately for Dredd the ghosts of past aren't staying quiet.

Highlight - Reliving one of the Darkest stories of Dredd's past and discovering how he justified it to himself. 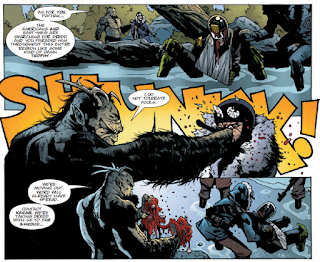 Shroud - The final piece and continuing the tale, started by Black Snow. Dredd has now been captured and is being held by Maul (who believes himself to be a manifestation of Chaos). Seemingly a Mutant/Alien who has discovered a wealthy income, but needs slaves to earn it for him.

Stupidly Maul tries to make an example of Dredd to the other slaves showing that he will be the one to break Dredd. Of course this stupid idea will not work and though trapped under a cloaked dome and heavily out numbered Dredd and the other slaves unite to over through this slave driver.

Highlight - Squidipedes - grud damn they are gross! Look like the "Them" from Fiefdom. A black carapaced multi limbed beast that can swim in frozen waters and eat a person whole!

With that we reach the end. A bit of a strange Graphic novel as they attempt to combine some of the more modern West vs East stories. I found the Sins tale a nice way to finish off Titan, I actually wonder why it wasn't included in the Titan novel (maybe a timing issue?). Then the Black Snow saga - Started off real strong, Black Snow and Echoes are great pieces. Shroud on the other hand let it down, maybe I am missing something but Shroud seemed disjointed to the other pieces. I am interested to heard if I did miss something vital, so let me know in the comments and as always thanks for reading.
Posted by Adventures with Peps at October 10, 2019