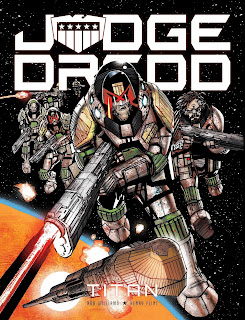 I am jumping forward in the Judge Dredd timeline with next review. I was lucky enough to get the following comic recently and decided to read it and review it. Why I hear you cry? Well the reason is I bloody enjoyed it. So let us dive in meatheads!

On Saturn’s distant moon Titan lies the Mega-City One penal colony for exiled ex-Judges – the most corrupt, dangerous and desperate to ever once carry the badge of office.

Now the Justice Department of Mega-City One has lost contact with the Titan penal colony – a big problem considering that it houses over one thousand law-breaking ex-judges, many of which have a grudge with their old colleagues. Now Dredd, must team up with SJS Judge Gerhart – a man who holds him responsible for ‘Chaos Day’, and battle a formidable army led by one of the most dangerous ex-undercover Judge’s ever 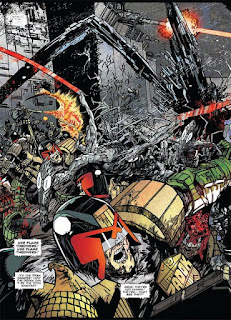 Titan was a roller coaster of a tale, which is why I love the Dreddverse. The first tale is of course Judge Dredd being sent to Saturn's moon of Titan to bring a prison revolt to end. The dangerous inmates have managed to overpower the guard force and declared themselves independent of MC-1 (Much to the embarrassment of Chief Judge Hershey). To make issues worst they are seeming lead by ex-wally Judge Nixon (see the Undercover Reviews for this amazing character). But of course Dredd could handle this alone, he needs aid. In steps a platoon of the Space Corps, trained for off world combat and believed to be some of the meanest troops out there. Long side this team we have a S.J.S member called Gerhart - who happens to have a grudge against Dredd due to Chaos Day.

Like most classic Dredd tales nothing is as it seems and it turns out this was all a massive trap to get Dredd. Soon 99% of the Space Corps are dead/dieing, Gerhart is horrifically damaged but is revealed to be mostly replacement machine parts and Dredd is captured. During his capture Dredd is continually beaten up and attacked before having his mind wiped and attacked again. Of course this doesn't last long and Gerhart against all odds is able to release and rescue Dredd. During their escape the final fatally wounded Marine activates plan b and starts setting off bombs to destroy the prison. In the ensuring choas Dredd and Gerhart escape back to MC-1, whilst the ex-prison inmates escape to the ice moon of Enceladus.

Highlight: Dredd is getting old. I am no were near these tales and I surprised at how he is viewing the world. I am excited to get this far into the tales and see what has happened to cause this.

Lowlight: Space Corps - best of the best! Dead in one panel haha.

The next tale is about the rebuilding of Titan and the lasting effects the mission has had on everyone. Dredd himself is seemingly broken and sluggish following this mission. Gerhart no longer trusts Dredd's ability to be an active Judge and is constantly monitoring him. The Ex-Judges on Enceladus are seemingly dead and gone (this does get explained). We then get treated to flash backs of Enceladus to see what happened to them, we also get an alien entirety that takes on the form of the deceased Judges and attacks MC-1 from the Black Atlantic, slowly covering the city in ice. We also get the return of Dirty Frank which is always welcomed. 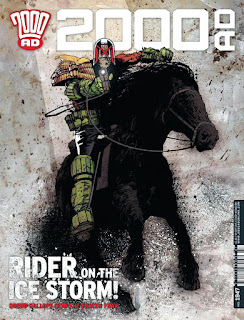 Highlight: Beyond Dirty Frank and highlight has to be Dredd and PTSD that he is seemingly suffering. Dredd really seems broken but that doesn't stop him calling in a napalm strike on his position in attempt to kill the aliens (so badass, especially as it melts most of his back off!).

Lowlight: There is a cool scene of Dredd riding a horse through MC-1 following the napalm strike, but I have no idea where such an animal would have appeared from? Got an answer for me drop it in the comments below please.

The final tale is Melt. I have already reviewed this one before so won't go to indepth again here. But basically it is 2000AD twist on the Snowman cartoon that plays every xmas in the uk. A fun silly tale that makes you feel bad for the snow men.

Overall a great drokking collection! It has left me a lot of questions to be answered but I am a long off from this timeline, so we will just have to wait and see.
Posted by Adventures with Peps at October 01, 2019