Book Review 58 // Path of the Seer by Gav Thorpe 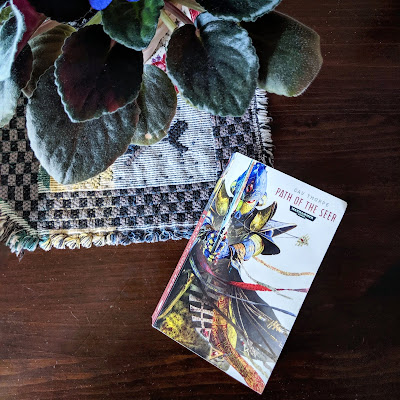 It's weird to think my first ever book review was Path of the Warrior of by Gav Thorpe and now 57 reviews and two years later we are at Path of the Seer. If you need a quick recap of what is going on with this series head over and re read my first review (It's what I did!).

Title: Path of the Seer

Commercial Fluff: The second book in the best selling Eldar series by Gav Thorpe.
The ancient eldar are a mysterious race and each devotes their life to a chosen path that will guide their actions and decide their fate. Thirianna abandons her simple existence to embark upon the mysterious Path of the Seer. She will tread a dark and dangerous road that leads her to the otherrealm of the warp, where daemons are made flesh and nightmares are manifest. For only there can she realise her psychic abilities. After unleashing her powers in battle and communing with the spirits of her craft world, Thirianna turns her skills to discerning the future amidst the myriad strands of fate. Her visions reveal a great threat descending on Alaitoc, and both the living and the dead will march to war to defend it.

It's nice to be walking through the halls of Alaitoc and this holy of craftworlds. Back in 2nd to 5th edition Alaitoc was my Craftworld of choice (had a liking for rangers). So being able to explore the craftworld through Mr. Thorpe's work is truly fun. It has also added some more terms, locations and character names to the Eldar Encyclopedia (once I've typed them in).

The main highlight of this book is finally being able to explore the inner workings of the seer path. This book did not disappoint on this front, it helped me to better image the warlocks and how they inner act with the Shrines, it made the skein seem more understandable, the reasoning behind rune craft and how a seer can become trapped on the path. This alone is worth the price of admission.

Another great highlight is the fact this is set in the same time frame as the first book, so we knew a bit of the character already and understood what was going on around her. This allowed Gav the ability to grow the character more organically and not having to ram details down our throat as we due what was happening to a certain point.

Lowlights for me were very few which is great. Though I understand it is a differing view point of what is happening, I feel I would have preferred to push the timeline forward a little more. I also would have loved even more on the different psychic paths - like the bonesingers, the spiritseers, warlocks, etc. I know their must be more options and it would have been fun to learn more about this.

Ultimately Gav Thorpe once more proves why I enjoy his tales. I really must try and pick up some of his non black library books and see if I enjoy those just as much.

Until next time feel free to drop me comment below.
Posted by Adventures with Peps at October 28, 2019