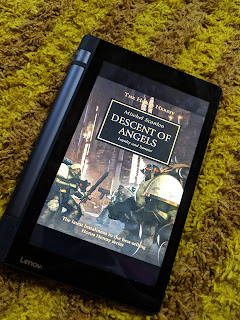 Pumping through these Heresy books like no ones business! It's almost scary how quick I am absorbing these books at the moment I am truly hooked. Now we are hitting a novel I have some bad reviews about but I am going in with a open mind, as it is about a popular Legion Dark Angels. I have enjoyed Gav Thorpe's 40k stories and all the mystery surrounding them. I just hope Scanlon does justice.

Commercial Fluff: The next novel in the ground-breaking, bestselling series that tells the story of the Horus Heresy – the civil war that nearly tore the human Imperium apart, ten thousand years ago. This novel explores the early history of the Dark Angels Legion and their Primarch Lion El'Johnson. When news of Horus's treachery reaches Caliban, the loyalties of this proud and mysterious Legion are tested to the limit, with tragic consequences.

Okay this book wasn't as bad as the reviewers made it out to be. It's definitely different from what has gone before, which could explain peoples strong opinion on this title. The first thing you need to understand is it is set prior to the previous novels. This is a creation story, a story of how the Dark Angels formed. It is also a book of two halves (a recurring set up with these novels it would seem).

The first half is all pre-imperium. We are introduced to Caliban a world that once knew technology but has since forgotten how to correctly maintain it. It is also a world that understands they came from elsewhere, they know Terra exists, they just have lost contact. This is different to most worlds of this period as many have forgotten they came from elsewhere and a lot believe they are the only world with humans on.

The planet of Caliban is something out of a King Arthur legend, rolling, deep forests, filled with monster and adventure. Isolated societies protected by Households of Knights, who themselves are viewed in a similar vein to Space Marines. Most of this part of the tale follows a young man becoming one of these knights and his progression within the order. It is also at this stage we meet Luthor and Lion El'Johnson - heroes of this era.

Then we hit part two of the book the arrival of the Imperium of Man. Now the knightly orders are forced to join the Astartes Legion, but only if they are long enough to accept the gene seed operations. Otherwise they face gene therapy or worst let get dismissed from the order. The knightly code is thrown out the window and life is turned upside down. Soon Caliban's forests are being cut down and the main characters are thrust-ed into space to wage war they nothing about 10 years prior.

It is here that division takes root. Some of the older members are unhappy with the route Lion El'Johnson is taking his knights and start looking to divided the new legion in two. Soon brother can no longer trust brother and lines are drawn.

This is actually a good read. Hard to read for sure following the earlier novels, due mainly to the change pace of pace and the fact that the early pages read like a fantasy novel. But as the divison starts to take root I find myself getting drawn in and wondering where it will take them. And who's side I would pick.

Drop me thoughts on this novel. Most people seemingly have a love hate view point on it.
Posted by Adventures with Peps at October 21, 2019