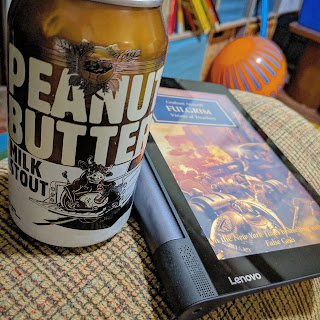 If you haven't guessed by now I am currently off work due to parental leave. What this has meant is that I actually have some time to read and more importantly catch up on my blogging. I am attempting to get as much done as possible to give myself a head start into the winter period. I will also be attempting to build myself a nice little gaming/blogging/painting office, so expect blog updates on that as well. As always please hit the follow as it let's me know if I am alone!

Let us get into today's book review. I'm still lurking in the 30k verse of Black Library, reading the awe inspiring Horus Heresy Series. I am now on book 5 of about a hundred so we could be here awhile with these reviews. But we have finally hit one of my favourite titles in the series Fulgrim. Yep that is right the Emperor's Children are coming out to play.

Commercial Fluff: It is the 31st millennium, and humanity is at the peak of its powers. As the Great Crusade, led by Warmaster Horus, continues to conquer the galaxy, Fulgrim, Primarch of the Emperor’s Children, leads his warriors into battle against a vile alien foe. From the blood of this campaign are sown the seeds that will lead this proud Legion to treachery, taking them down the darkest of paths of corruption. Leading up to the carnage of the Dropsite Massacre on Isstvan V, this is the tale of Fulgrim's tragic fall from grace. 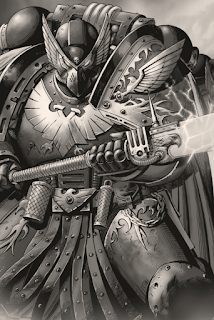 Okay so I am once again left feeling sorrow once again for another fallen legion. This book hit some strings that is for sure. We start of the book being shown the Emperor's Children pre-fall. A near perfect fighting force, proud of their achievements but ready to achieve more. This is sadly the fault that would ultimately break them, their thirst for perfection. It is truly great to see the legion portrayed in such away as it makes their downfall more realistic and hurtful, as you can't believe these characters would devolve so much!

Like a lot of these early 30k novels the first part is slow moving. Though we are treated to some exciting pages, the whole point is to make us learn about and enjoy the main cast characters. Then the novel gains pace and you are now trapped on a rollercoaster that you know will end in a horrific crash and there is nothing you can do apart from hold on and wish it won't happen.

Highlights for me include; the characters, the creation of lifetime favourites like Fabius and Lucius, alongside tragic characters like the remembrancers. The birth of the noise marines is a horror inducing section of the novel, worthy of a Hellraiser film. And of course the story of Fulgrim and Ferrus Manus. Truly a heart breaking tale. Also some Eldar are in their which is always a plus in my readings.

Lowlights. Not many I would have liked maybe two books instead of one. Maybe a more standard building up to their fall (possibly ending with the destruction of Laer and sword), then the second being their fall from grace to the drop site Massacre. But that is really me just being picky.

If I was to ever get into the Horus Heresy game I believe I would have to go Emperor's Children. So dark, so broken, so proud and so much room to play with conversions. Great and inspiring read. 10 out of 10.
Posted by Adventures with Peps at October 14, 2019