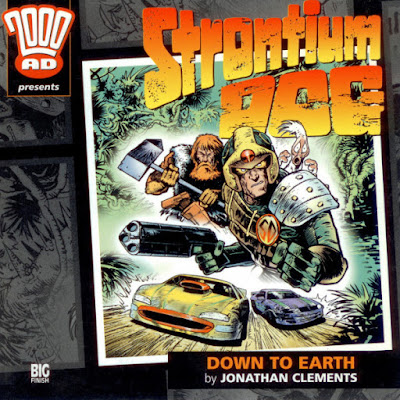 It's felt like an age since I did an audio review, the last was back in July. I am continuing on the Big Finish audios as I really enjoy the production and of course the themes. This time it is not Judge Dredd themed but instead 2000 AD's second most popular character Johnny Alpha.

Commercial Fluff: Times are tough for the Search/Destroy agents. With criminals in short supply, the bounty hunters compete for the left-overs. Johnny and his partner Wulf Sternhammer are down on their luck, and looking for trouble.

Sick Squid doesn't follow the bounty hunters' code. He looks after number one, even if it means ratting on a friend. When a private citizen posts a huge reward for the capture of Wulf Sternhammer, Squid turns kidnapper.

Johnny must find Squid before the trail goes cold. If he wants to save Wulf, he's going to have to break the law. He must risk his freedom… face his past… go back down to Earth!

First up it has been a long time since I have read, heard or done anything with Strontium Dogs. Most of my actual experience comes from either a Middenface tale or Durham Red. I am serious contemplating the Warlord Games boxset, but before dropping to much cash I decided to read and listen to some tales to see if I liked it. Up first was this Big Finish Production Audio. I've enjoyed the Dredd cases I've heard so this seemed like a solid choice.

The tale starts off in what I believe is called the Doghouse - A place the Bounty Hunters discover new bounties and cases to work on. Whilst here the characters all talk and complain about a lack of jobs when suddenly a new bounty pops up. Looks like Wulf Sternhammer has pissed off someone and now has a bounty on his head! Suddenly Johnny Alpha and Wulf are ambushed by the collective group, whilst Johnny is distracted by the masses Wulf is attacked by Sick Squid and heads to earth with the viking Bounty Hunter.

Realizing he has been tricked Johnny Alpha is soon on Squids heels and tracks him down to Milton Keynes UK. Of course nothing goes to plan and so Johnny is in Jail. Here enters one of my favourite characters Middenface McNulty who pretends to be a lawyer and secures Johnny release. We are also reintroduced to the Gronk character and soon the team are back on Wulf's trail.

They follow the thugs and Wulf into deepest darkest Essex. Turns out the mastermind behind the kidnapping was none other than Weisser the Splicer aka Johnny Alpha's Aunt Lizzie! Seems like Lizzie is a norm and has been connecting experiments to solve the mutant problem within Britain. She believes she can create a nano-virus that once spread would repair all the genetic damage caused by radiation in the atmosphere, all it needs is Wulf's brain and spinal column!

Soon a fight breaks out, Wulf is freed and the bounty hunters are soon heading away from earth again very happy to escaping Britain.

I found the tale very easy to listen to and the acting and sound play was high quality as I've come to expect from Big Finish. I do wish I understood the storyline a bit more, so I am now eyeing up the collected volumes and plan to soon start reading these.

Have you read Strontium Dogs? What are your thoughts on it? Let me know below please. 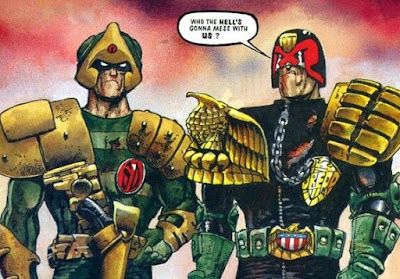 Posted by Adventures with Peps at October 08, 2019