Welcome back everyone. I was away for a bit there due to family responsibilities but I'm back now and diving head first into issue 10 of Lawman of the Future. That's right we are officially into double digits. 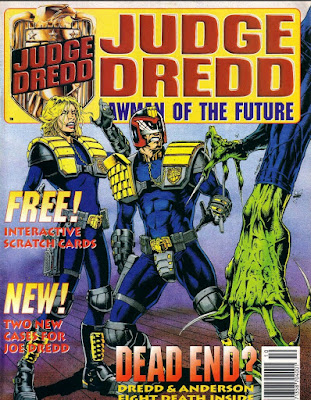 First up the cover. We knew it would be Judge Death heavy so no surprise to see his corpse hand on the cover. Whilst Judge Dredd looks worries, PSI Judge Anderson looks like see is giving a speech. Not sure what the artist was thinking with this posing. As always there is something for free and two new stories.

This issue contains three tales as always. Judge Death (Part 3), Election Day and finally Perp Running. I also see a picture of Otto Sump so I am excited to see which tale he will be in, I can only assume it will be Election day. 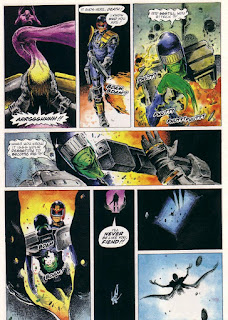 Judge Death (Part 3) - Final we are getting the showdown I wanted. Judge Anderson versus Judge Death. Breaking through Death's psychic wards, Dredd and Anderson finally come face to face with the super villain. Physically weakening the body of Death, Anderson attacks Death on the spiritual realm. Using his own spirit trapping orb to capture the superfiend and entrap him with the spirits he has tormented.

The artwork was beautiful, and though the story deviated for main stream Dredd I enjoyed the twist. The way he was trapped at the end was a great way to finish this villain off. Great start to the issue.

Up next is a double page showcasing the ruling council of MC-1. 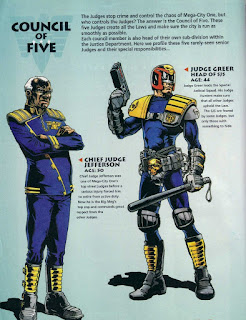 Chief Judge Jefferson - Non existent in 2000Ad so have no idea about him. Seemingly a street Judge before injury. Not much else to report on him.

Head of SJS - Judge Geer - Once again an all new character. I'm a bit confused as to his look. In the movies the SJS are all black military looking, designed to take down corrupt Judges. Whilst Geer looks like a street Judge with skulls, a bit of a miss for me. 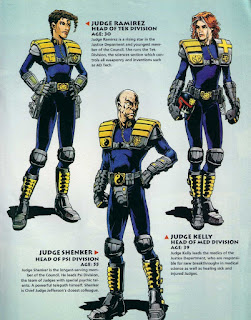 Head of Tek - Judge Ramirez - okay seems to be all new characters with no links to 2000Ad. Sadly not much to report on the character.

Head of Med - Judge Kelly - once more no real details. Disappointed none of these characters have links to actual 2000Ad characters.

Head of Psi - Judge Shenker - holy crap this one is based on an actual character! I wonder if he will be like his inspiration or actually be good at his job? I hate the Ying and Yang logo. Very weird uniform choice. 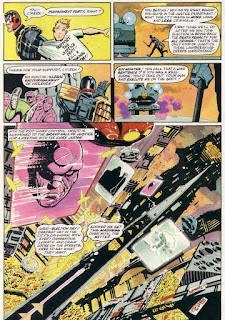 Election Day - The city is voting on who will be the next mayor of MC-1. The parties running include: Ugly Party, Free Mean Machine Lunatic Fringe, Peace Party, Punishment Party and Citizens for a Non Violent Society. Just like most things in MC-1 it soon devolves into a fight and Dredd is called into to make arrests.

With attacks rising Dredd becomes bodyguard to Otto Sump of the Ugly party and has to keep the leading candidate alive long enough to win the election.

Fun read for sure. Reminds me of a novel I read where it was election day but instead of Mean Machine, Judge Death was the random choice. 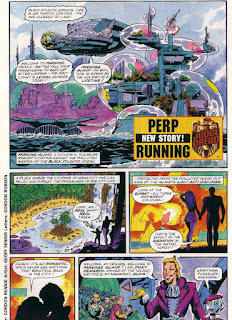 Perp Running (Part 1) - continuing the big mega racket story arc. We are introduce to Paradise Island, a resort floating out on the Black Atlantic. Here rich Mega City citizens come for holidays and to view the strange sea creature exhibits. It is also a base for perp running, changing a perps face to match a tourist before killing off the original. Soon Dredd has taken down some of the criminals and is heading to Paradise Island to follow the trail.

Good start to this tale and I am excited to see how the Kraken comes into the story. Also good to see tales escaping MC-1 and showcasing other locations.

Overall this is a great issue. Solid stories for all three. Great artwork and an okay filler piece. Now to start on issue 11.
at September 18, 2019

Beginning of the End times.

***Please note this was written before the big release reveals on May 23rd, which is so cool I really enjoy seeing a new edition and how the...