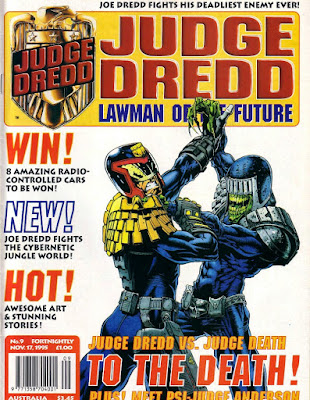 Following on from the exciting introduction of Judge Death, I am swiftly moving onto issue 09. The cover is intense showing Judge Dredd versus Death in a killer embrace. Death looks crazy badass, but the real shocker is the tagline of meet Judge Anderson. So not only is Dredd getting some support but it is going to be the amazing PSI Judge herself. The rest of the cover is the classic line up, prizes to be won, great artwork and a new story.

The tales in this issue are Block War, Judge Death and Job Selling. Following the opening page we are introduced to PSI Judge Anderson and her case files. Not the most in-depth telling of her character but at the bottom of the page is some gang slants that I feel hint towards what is going to be seen in the comic. 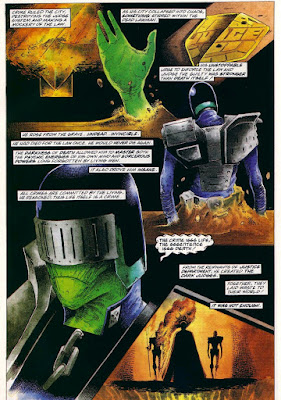 Tale - Judge Death Part 2 - Eek! I'm excited for this one. Dress is pretty much at Deaths mercy and is only saved when reinforcement arrived. Having believed to had destroyed the host body, Dredd takes the remains of the body to psi division and we final meet Anderson. Whilst this is happening a survivors body is transferred to the local medbay, but why does the doctor believe this survivor is dead.

First up this is a three parter! This is new unheard of territory for the magazine. Secondly why is Anderson hardly in it? Give me more Anderson. Great opening tale.

We are then treated to a competition, a few adverts and the exit polls of previous issues. Then we get some info on the Angel from the Film, along side a two page poster of Mean Machine. All pretty standard. So let's move on. 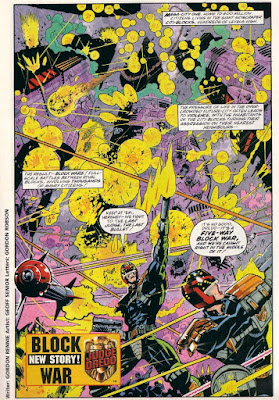 Tale - Block War - opening panel is intense featuring Dredd and Hersey in the middle of a five way city block war. The lead up of the block war is pretty simple. The city housing department has decided to build five city blocks (The Jackson Five) and house the roughest members of society there, they hope to curb all crime in this way.  Well it didn't work and soon the blocks are a mess and block war is declared. Judges are called in to bring the blocks back under control. Soon through heavy handed violence and some knock out gas, four of the five blocks surrender. Only Micheal Jackson block remains lawless, but this comes to a swift end after Dredd smashes his way through the top floor killing the leaders with excessive use of a H-Wagon (think flying tank).

This was a classic Dress story line, full of over the top violence and action. Loved seeing this verses version of the H-Wagon. Looks menacing and brutal which it should. 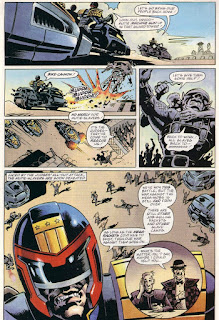 Then a standard page of readers letters before the final Tale - Job Selling. The mega rackets are conning innocent citizens into believing they are heading to a well paid job. Unfortunately for the gullible citizen that job is as a slave, in a mutie mine in the Cursed Earth. Of course once Dredd finds out it all comes to violent end!

Great issue all three tales are epic and great reads. Of course the Death tale is the best, but the other two are great representations of MC-1 life and worthy of a read.  Now onto issue 10.
Posted by Adventures with Peps at September 01, 2019