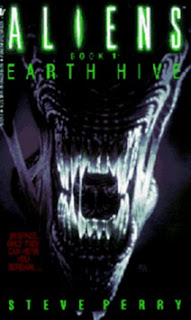 Taking a little break from the Black Library catalogue of tales (there is so many!). I knew I wanted something in the science fiction range but what? I then remembered the Alien franchise and Ripley. It's been awhile since I last tackled an Alien book, so I headed to the e-library and grabbed Volume One which contains three tales. The first being Earth Hive.

Commercial Fluff: Wilks was a space marine with a near-fatal flaw: he had a heart. Billie was a child, the only survivor of a far-flung colony outpost. Thrown together in the last hellish night of an alien invasion, Billie and Wilks helped each other get out alive. Thirteen years later Wilks is in prison, and Billie lives in a mental institution, the nightmare memories of the massacre at Rim seared into her mind. Now the government has tapped Wilks to lead an expedition to the aliens' home planet to bring back a live alien. But the competition on Earth to develop the aliens as a new weapons system is brutal. When Wilks's team departs on their mission, a trained assassin trails them. And what follows is no less than guerrilla warfare on the aliens' planet - and alien conquest on Earth!

I think it comes as no surprise that I enjoy a good Xenomorph book. This one was written in the early 90's to tie in or novelize the Dark Horse Comic collection and is Book 1 in a series following the characters Wilk and Billie.

Wilk and Billie can be compared Dwayne and Newt of the film franchise. Wilk's is a Colonial Marine who was sent in to rescue and investigate a mining colony that had gone quite. Sadly it turned out to have been a Xenomorph infestation. Out of about 40 troops sent in only Wilk survives and managed to escape with Billie (the only colonist survivor at the age of 10). After returning to Earth (something Dwayne and Newt failed to achieve) Wilk is sent to a prison complex for interrogation and Billie is mind wiped, in attempt by the military to cover up the xenomorph threat. Jump forward 10ish years and we are now ready for this tale.

During a routine clean up of the atmosphere surrounding Earth, a spaceship is discovered carrying a Xenomorph! Luckily for Earth the ship is destroyed but not before the flight route is discovered. Soon the military are mounting a mission to the believed home world of the Aliens. As you can imagine there is a lot of backstabbing (thanks to the companies) and soon a small group of Marines have landed on the home world. As in all classic Alien films/titles nothing goes to plan and as the Marines start dieing on a far away world, Earth is faring no better with an outbreak of Xenomorph's!

By the time our two main characters arrive back to Earth, everything has gone to shit and mankind is abandoning Earth to the Xenomorphs! The tale ends with Wilk, Billie and Mitch (android) smuggling onto one of the final spacecrafts leaving earth and their destination is unknown. 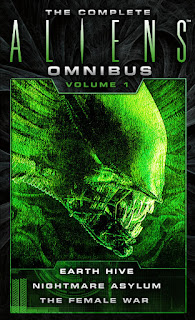 Quick easy reading and quite the page turner. It was fun to explore a world controlled by the Xenomorphs. The real highlight for me though was the crazy cult that grew around the xenomorph's on Earth. It would seem the Queen is able to manipulate those sensitive enough to her mind control, just like the drones. I really like the idea of this weird cult, who willing choose to be the new generation of Xenomorph's and how after being infected spread across the globe, to create new queens and hives.

Could have been two books. One book could have been purely about the attack on the Alien World and one book about the spread of the xenomorphs on earth. Sadly instead they rushed both tales a bit. I also found the xeno's description a bit comical but how else would a human describe a xeno than Banana Headed!

Overall a fun, tie in to the movies and a great leaping point into this new series. Watch this space as I start Nightmare Asylum book two in the series.
Posted by Adventures with Peps at September 28, 2019