Book Review 53 // The Tomb and other short stories by H.P Lovecraft 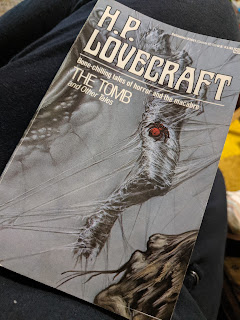 Back at the reading again and this time it's into the early works of  H.P Lovecraft. Originally I was going to review each tale separately but they are rather short tales so I am combining into set piece.

Up first, the title piece - The Tomb.

Originally written in 1917, this tale was Lovecraft's first adult story. The most telling thing about this tale is that there are no eldar god's. That right it's a straight up psychological, horror tale. It tells the story of child who discovers the entrance to a long abandoned mausoleum, whose line is believed to be ended following a fire of their nearby mansion. As the story progresses we find the child growing into a man and becoming more obsessed with tomb. There is some unusual time hopping dreams in this tale, which gives it a nice twist and the ending is a little sad for the main character as he locked away and viewed insane. In all a great opener if a little short.

The Festival - A Christmas tale if HP ever actually wrote one. Describes the tale of a young man being called back to his ancestor home Kingsport for the Yuletide. It makes note of how everyone acts and seems strange towards him and whilst in a run down, damp house he discovers the Necronomicon. Then as the bells chime he is lead into Church which houses a mysterious underground cave system and for the first time introduces the Byakhees (something that would be a staples of Mythos). Highly descriptive and an amazing read and easy to see why Lovecraft started down this road to the Mythos. 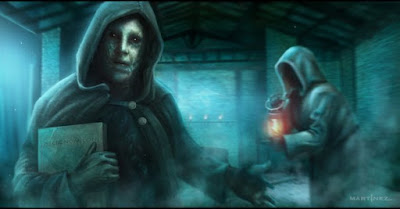 Imprisoned with the Pharaohs - Credit to Lovecraft and Houdini (Yes Harry Houdini though it is said he didn't help much). It represents a Houdini adventure and reads a bit like an Indiana Jones adventure. It was an okay tale at best, easily forgotten and bit to far from the Lovecraft I enjoy.

HE - Based on Lovecraft's time in New York City. In this tale he attempts to bring an evil sorcerer into the setting of New York and sadly fails. This instead showcases the racist that was H.P Lovecraft and was awkward read. So we will swiftly move on.

The Horror at Red Hook - I hate to say it but another xenophobic tale from Lovecraft. At least this he covers it slightly better than in HE. We join a police officer named Malone, as he attempts to discover the cause of the resent surge of illegal aliens in the area. All the clues ultimately lead to an abandon church and when raided it is discovered it was the center of activity for smugglers. But it doesn't end there. Instead we find out they worship dark, long forgot cults and have possibly brought back something evil from a time that should have been forgotten. If you can past H.P Lovecraft's xenophobia comments you have a great tale. Read with caution. The Strange High House in the Mist - Now we hit a more classical style Lovecraft tale. We have a professor, we have an isolated New England setting and we have a creepy ass house in a location no one should ever go exploring! A short and creepy tale that leaves you wondering how far the threat extends...

In the Walls of Erynx - A science fiction piece with all the Lovecraft twists and turns. I never realized he had attempted Sci-fi so I was extremely intrigued by this one. Set on and new colonized Venus we follow a brave mineral prospector as he travels aboard looking for a rare mineral. Only problem is this mineral is normally protected by a lizard man race native to Venus, believed to be inferior to mankind. The tale itself is a great read and can't help but feel bad for the prospector as he becomes entrapped in an invisible maze, made by what he believes to be an inferior race.

The Evil Clergyman - The final tale of this book and also H.P Lovecraft's final ever written piece. This is short tale and it struggled due to the limited page count. We have our character alone in a room and due to a reason I am unsure off he is able to swap bodies and possibly travel back in time to become an apostate of an earlier time. I didn't enjoy this tale at all, but it could have been purely due to me not understanding what was happening. IF you can explain it to me drop a comment below.

Then we get some filler to finish the book with titled Early Tales and Fragment. These are basically early works or ideas for tales that were never fully explored, if you are fan of Lovecraft than do read. Otherwise skip pass as they don't add much for their worth.

Overall this book is a solid read if you want quick punchy tales, if you are looking for a more in-depth tale to enjoy look elsewhere.

Cheers for joining me.
Posted by Adventures with Peps at September 24, 2019