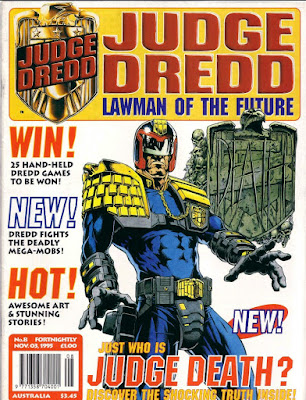 Just like that we are a third of the way through these classic comics of the mid nineties. They are honestly better than what I was expecting, but some issues seem to be of a higher quality than others and I really hope the quality stays fairly high and we get some interesting articles in them soon.

With that in mind we dive into issue 08. I'm excited for this one as we see the entrance of Judge Death! The cover is pretty standard with Dredd dominating the cover and the creepy Judge Death themed badge looming over his shoulder. It would also seems like a new mobster story is coming, along with 'Hot' artwork, the chance to win some games and Who is Judge Death?

Stories inside this issue are; Organ Legging which we can assume is a one part story, part two of Death Hunt which must end this issue and finally Judge Death which has to be a two parter? I'm already a little worried as the image used on this page makes Death look a bit stupid, I hope the artwork is better than that. The next page is almost a full spread of Judge Dredd Casefile, based around info already provided by this comic. The artwork is rehashed from issue one and the info is a bit lack luster. Nice idea if they had put some real effort into it. 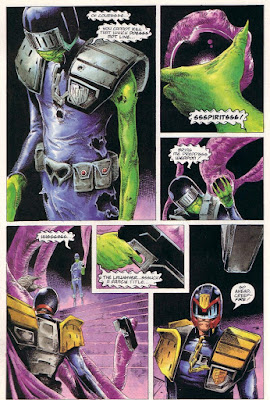 Tale - Judge Death. What on earth! The main tale is up first and this has taken me by surprise. As a freak storms wrack MC-1 a figure looking like a Judge appears in the middle of a road in front of a prisoner transport rig. After smashing through the window after being hit, we discover the person is none other than Judge Death. His belief is simple, crime can only be committed by the living; thus life is a crime. Soon Death has killed all the criminals and is mind controling the Drivers. Using his hijacked truck he smashes into a local iso block freeing all the inmates. As the inmates dream of freedom, Death is quick to act and wipes out the entire prison population! Dredd finally arrives and a showdown starts. Death seems to know a lot about Dredd which is creepy, but when he takes Dredd's lawgiver and fires it we can only believe Death is Dredd! What the hell!?

Such a great start. The artwork was solid, the character creepy and the story mind boggling. Is he Dredd? 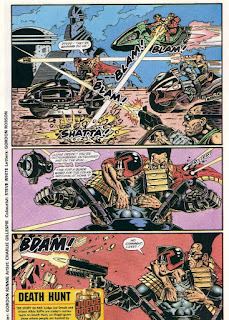 Tale - Death Hunt. Part two, Judge Dredd is running from the Hunt club. All he has to do is keep them busy long enough for the Tek department to discover their where they are filming and broadcasting from. Got to be honest, it was a weak story last issue and following the first tale it feels even more lame. The artwork is lacking and the story pretty straightforward. Let just move on.

The next few pages are classic readers letters, drawings and photographs. They are a funny to reader and remind me of a simpler time. But with that we head into the final tale. 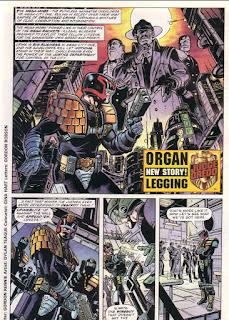 Tale - Organ Leggers. Judge Dredd is taking on the Mega-Mobs in this tale. Following a raid on a low level crime crew, Dredd discovers one of them is carrying a pair arms! After a finger print test proves the arms belonged to a legally dead victim, Dredd knows exactly where to continue his search - Resyk.

Resyk for those new to Dredd, is a factory that takes the dead and breaks them down into usable parts like plastics. Here everything is used apart from the soul!

Inside Resyk Dredd tracks down his next perp and discovers where the bodies are being stored. Following a raid a large mob rack has been closed down, meaning Dredd is making friends once again and only time will tell what this means for MC-1.

And with that we finish issue 08. Definitely an improvement over 07. Standout story was of course Judge Death but Organ Leggers was a close second. Hopefully issue 07 was a blip, but I guess only time will tell.
Posted by Adventures with Peps at August 31, 2019