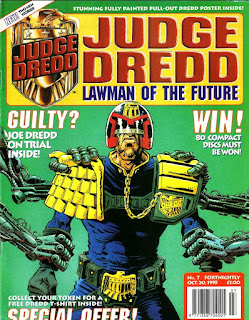 Moving swiftly on with Lawman of the Future we hit issue 07. The cover is dominated my Judge Dress being held by Robotic arms and bold Guilty? written above it. Finally we might be hitting this verses version of the robot wars! Along side this we get told there is a chance to win a CD audio drama and claim a free T-Shirt (what is with all the free stuff?).

The first tale is going to explain the cover so let's jump straight in. 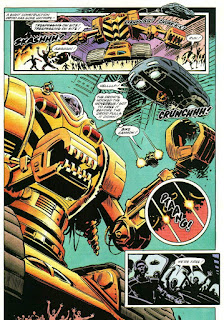 Tale Revolt of the Robots - Judge Dredd is in the deep end this time. All across Mega City one droids are starting to revolt against their human masters and it is up to Dredd to workout what is going on. With the assistance of his trusty robot house keeper Dredd manages to locate the ringleader of the droid revolt. He just needs to stay alive long enough to bring them to justice.

Pretty good take. Doesn't hold up as well as the traditional telling of the tale, but it's a classic Wagner take attempting to confront social injustice. 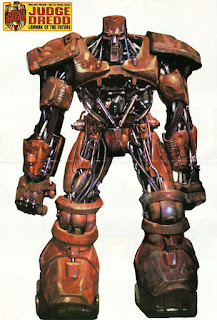 Next page is not that exciting. It showcases different droids found throughout MC-1 and the roles they play within the futuristic city. Closely followed by a two page spread of an ABC warrior Droid poster. Based on The Hammerstein droids used by President Booth in his failing years of government. This one made it in to the film and made for a cool villain.

Tale Quake Part 2- As we last left Dress he was attempting to rescue citizens from a collapsing tower as Quake struck once more. Knowing he had to find him fast Dredd realized he had to be operating out of the Undercity. Soon Dredd is on his tale and it turns out he was a ordinary citizen replaced by droids. And in his quest to prove he was better he had actually became the thing he hate most. 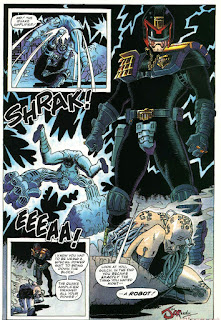 Then some dull readers letters and drawings, I get it is aimed at kids but come on give us a real article! We also get the hint that Judge Death is in the next comic. So excited to see how this series deals with such a super fiend!

Tale Death Hunt Part 1 - As a citizen most of your day is filled with boredom. If lucky you my have a hobby like Batgliding or dishwashing. But if you are really lucky you might find yourself the next selected victim of the Hunt Club. The hunt hunt is a bunch of wannabe killers who random select a citizen to hunt and kill, whilst rich guys bet on it. Lucky for our citizen Dredd is nearby to lent a saving hand.

With that issue 7 is done. Not gonna lie very underwhelmed. The stories lacked purpose or depth. The filler articles added nothing for the reader and I'm willing to state this was most likely the weakest issue yet.

I hope 8 is more actioned packed especially with the appearance of Judge Death. I hope they make him extra creepy. Until next time.
Posted by Adventures with Peps at August 26, 2019