Fifty comics in and wanted to read something fun. Then I remembered how much fun volume one of Mega-City Undercover was, so I decided it was time to crack into volume two. 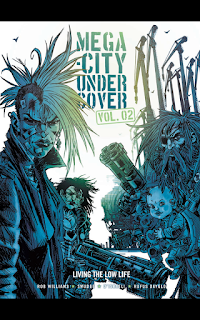 The cover showcases the stars of Wally Squad: Aimee Nixon, Dirty Frank and Thora. It reminds me a lot of Tank Girl with the way it drawn and the subtle blues and yellows make it quite the striking cover.

I'm intrigued to find out why Dirty Frank has a baby strapped to his chest. I'm more intrigued as to why the baby has a gun! I can only assume it will be a high tale of comedy and adventure. So with the cover "covered" let's dive in to the stories. 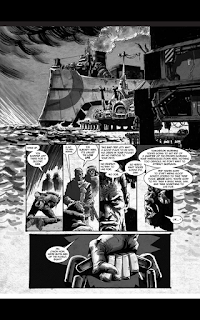 Amy Nixon. War without bloodshed: First tale is deep and emotional for Nixon. After sleeping with an informant, Nixon hears a pro-democracy group has taken over a local low life docking yard. In an attempt to infiltrate the group Nixon is sent on a suicide bombing mission to become the group's fall guy. During this attack Nixon realizes the group is in fact a front for Soviet forces to infiltrate MC-1. For reasons unknown, Nixon fails to inform Dredd of this and heads back to the pro-democracy group believing her cover to be intact. Upon her return she finds that the docks are empty and her lover/informant dead.

We then get a classic showdown at sea and discover Nixon has trapped herself within an a web of lies and has to keep the Soviet smuggling ring a secret, otherwise she would admit to knowing this fact earlier and be setting herself up for a one way trip to Titan.

Loved seeing the docklands and the grim dark artwork, I see this as being a real turning point for Nixon and I fear she is heading down a dark path. 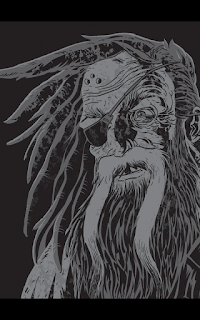 Dirty Frank. Creation: After a long run of being a Wally Squad Judge in Low-life, Dirty Frank has received the call he has always feared. Retirement! Now tasked with training his replacement Dirty Frank has to accept his time is over and discover the truth behind the Creation drug sweeping through Low Life.

This tale is a weird one as more and more biblical themed trails pop up in low life. This tale kept me guessing what was happening right up to end. Safe to say Dirty Frank rescues everyone and gets to keep his job and continue to give us more entertaining tales. Once again stunning artwork on this tale, this volume has been killing it with the black and white artwork.

Jive Turkey: Looks like we have hit Xmas time in MC-1. A bit of a filler piece involving all the Low-life characters. It's Xmas day and the assembled crew are each spending the day with their uncover friends/criminals, but when Frank's doesn't show up on boxing Day it is up to the crew to discover why and rescue him.

Not much else to say very filler and easy to skip past. 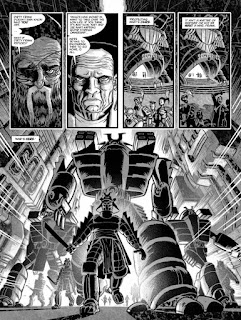 Dirty Frank. Hostile Takeover: It's been a Frank heavy volume (which is great).

This tale was big with far reaching repercussions on Low-Life. It would seem Hondo City Yakuza have taken an interest in Low-Life. Their goal is to take down the Big man (why? This I am not sure about). Soon Yakuza hitmen are tearing the heart out of the criminal organisation and the wally squad Judges are caught flat footed. But soon it all changes following the suspicious kidnapping of Judge Nixon, why did they take her alive? Why did they keep Frank alive? As the story unravels we get more and more questions. Why is the Yakuza interested in Low-Life? How many Judges are corrupt? Who's going survive? Is Nixon the big man? As I said this was a pretty epic tale to finish with and I am excited for volume 3.

I'm actually a little stunned by the final tale. The sheer scope of corruption in Low-Life is shocking. All the main characters have been affected by this and seemingly half are dead now. Dirty Frank is an amazing character and I'm interested to see how long he stays in uniform for. As for Nixon, I knew something was coming but I can't honestly believe she could be the Big Man! It seems like to Big of a leap, is Aimee truly going rogue/corrupt? As I finish this I am downloading volume 3 so hopefully can have another review up by the weekend.

As always thanks for reading.