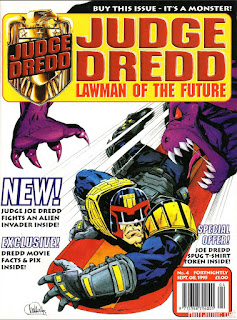 Welcome to issue 4 of Judge Dredd Lawman of the Future. The cover shows Judge Dredd crawling on the ground or a board whilst a purple alien/monster roars overhead. There's no real clues on cover of what is inside, it mentions the monster, some photographs and the ability to buy a t-shirt. Pretty lame to be honest.

The stories included in this issue is Monster, Illustrated Assassin and Homunculus. Having read the overviews I'm excited to start Homunculus. Without further ado let's get going.

First page is all about Judge Hershey, her role in the movie and the comic. It's not very informative sadly, could really have been a much better article. Let's just ignore it and move on.

Monster: Judge Dredd stumbles upon what looks like a murder but soon discovers it is an alien attack. After a quick one sided fight Dredd barely walks away. Only after a tipoff is Dredd able to get a rematch and this time he is packing Hi-ex. Nothing bad about this story and I love a galactic threat, it was just to straight forward for me. 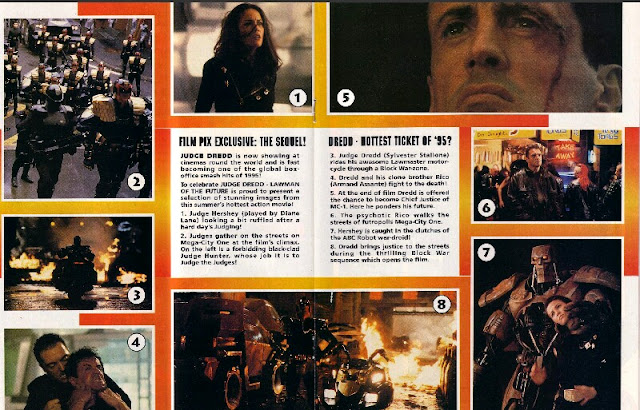 We are then treated to more pictures from Dredd the movie. There is so much to dislike but also so much to love. The city looked amazing, the ABC Warrior was stunning, but Dredd taking the helmet off is unforgivable. But I do enjoy watching it on a lazy Sunday afternoon with a beer. Just don't tell anyone. 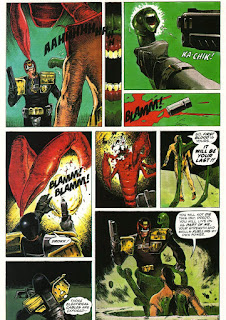 Illustrated Assassin Part Two: Judge Dredd is chasing the Pacific Rim mutant assassin. All he has to do is survive the chase long enough to reach the perp.

After faking a fatal crash Judge Dredd traces the camera back to the local sewer systems and discovers the kidnapped Judge Hershey. Here and now we are treated to the title fight.

Even after taking an early lead, Dredd is over powered by the mutant assassin. Luckily for Dredd Hershey comes up with a way to stop the assassin and swing the battle in Dredd's favour.

We are then treated to a truly interesting two page spread on how the BBC created an audio Drama based on the famous story The Day the Law Died. It was interesting to read how they made some of the sound effects, especially Judge Fish's effects. This is how all the bonus articles should be written! 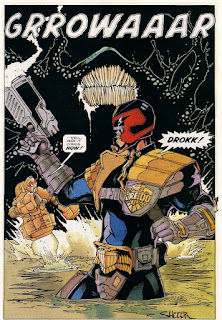 Homunculus Part 1: Now the story I've been waiting on. Whilst on routine patrol Judge Dredd stops a group of Troggs who are attempting to enter MC-1 illegally from the Undercity (a home to criminals, mutants and the forgotten). After rounding them up the troggies explain to Dredd they are fleeing a monster and seek the help of the Judges to bring an end to the creatures life. Here begins the monster hunt!

Love the sewer droid and the final reveal of the monster! Next part should be epic.

And with that another issue is finished. Got to say this is an impressive issue. Two out of the three stories were solid (alien wasn't great). The filler articles on the actual movie were okay, whilst the audiobook article was in-depth and enjoyable to read. But I'm really excited for the follow up to Homunculus, my next mini project is to design a Troggie gang for Judge Dredd gaming and Necromunda so this is quite inspiring.

As always leave me a comment below.
Posted by Adventures with Peps at August 02, 2019