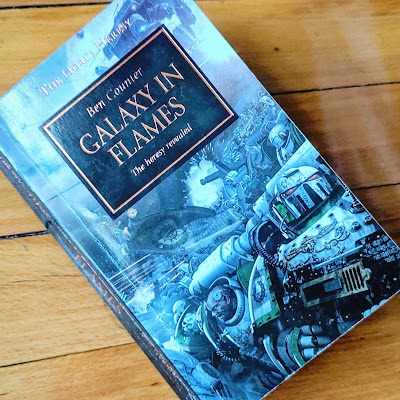 When I first started up this blog I had planned for one filled with beer and Warhammer. No way did I expect the blog to become primary books and comics. Though beers still feature and will continue to I feel the Warhammer aspect is kept alive purely by the novel I read. Which leads us nicely into today's review.

Title: Galaxy in Flames
Author: Ben Counter
Publisher: Black Library
Type: Paperback
Page Count: 416
Commercial Fluff: Having recovered from his grievous injuries, Warmaster Horus leads the triumphant Imperial forces against the rebel world of Isstvan III. Though the rebels are swiftly crushed, Horus's treachery is finally revealed when the planet is razed by virus bombs and Space Marines turn on their battle-brothers in the most bitter struggle imaginable. 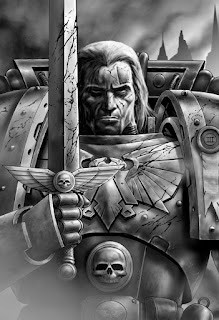 Having read this novel when it first came out I am sad to start it once more, as I know where it will lead. I will feel the same heartbreak for the characters once more. I enjoyed this book back then because I had an idea of where it may lead, but now I know for sure and I feel I am picking at an old wound which has not fully healed.

Already this sounds deadly, as the term Long Knives brings up images of Night of the Long Knives. A night in real life when a rising dictator cleared his rank of those who could stand against them. The beginning half of this chapter brings us to speed, Horus has fallen to treachery and with the help of Erebus is now forming pacts with daemons. We also discover that a few of Horus' brothers have already sided with him - chief amongst these being Fulgrim of the Emperor's children.

Elsewhere on the ship Euphrati Keeler is still unconscious after her run-in with daemons in the library, and with the aid of Kyril Sindermann is on the run from the Legions. Whilst prone Keeler is completely unaware of the cult that is forming around her. And the ultimate effect she is having on those around her and the future of the Imperium.

This section then finishes with a battle on Isstvan Extremis where forces (possibly not loyal to the Warmaster) are deployed against a Warsinger and protecting troops. In this battle, we get reintroduced to characters that have only played a bit role or have been mentioned in passing. Characters like Saul Tarvitz from the Planet Murder story and Garro of the Deathguard. It is also revealed that something isn't quite right within the ranks of the Emperor's Children. Leading us nicely into:

Following the failed attempt to sway Tarvitz, the Captain of the Emperor's Children has finally seen the light and noticed something is amiss. Then as the war for Isstvan III begins Tarvitz's fears are realized. This is actually a purge of the ranks and that the Primarchs have gone rogue. Fleeing his flagship Tarvitz steals a Thunderhawk and attempts to escape to the planet in hopes of warning the others. During this attempt, Tarvitz is aided by a long-time friend Garro who destroys the pursuing crafts chasing the Thunderhawk.

Elsewhere in the fleet, the traitorous moves are being played out and on the Vengeful Spirit, the remembrancers are gathered together and purged from the fleet in bloody gunfire from the Sons of Horus. Euphrati Keeler and Kyril Sindermann only survive this purge by being aided by the Sons of Horus Captain 'Half Heard'. With his assistance, they escape the Vengeful Spirit and find refuge with Garro. It is during this section of the book that the betrayal is set in motion and the virus bombs "Life Eaters" are launched on the unaware troops on the planet below.

Thanks to Tarvitz's warning a large amount of the Isstvan group forces survive the bombing, enraging the World Eaters Primarch who leads an assault against his former brothers in arms. With the war going awry, Horus is forced to commit forces to the planet and a drawn-out battle begins. During this time Tarvitz rises to take command and leads the defence of the betrayed troops.  Unfortunately, the betrayals keep coming and Tarvitz's own 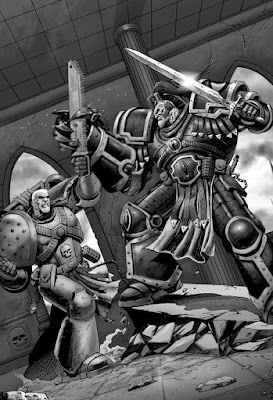 friend Lucius double-crosses the defenders and weakens their defences. The book ultimately finishes with some epic showdowns. Up first Tarvitz versus Lucius, though completely outclassed by Lucius. Tarvitz is able to use a move learnt from Loken in an earlier book to gain the upper hand, forcing Lucius to flee into the swirling melee to escape. Then we get the title fight - Loken and Torgaddon versus Abaddon and Aximand. Set in the dramatic parliament building, the fighting breaks into two groups. It soon becomes apparent, that the traitors are better fighters and Aximand claims first blood killing Torgaddon. Fearing the end is near Loken attempts to sell his life nearly, but as all seemed lost a giant titans foot crushes the chamber forcing Abaddon and a regretful Aximand to flee. The final scene is a trapped Loken watching the bombs fall once more as the traitors fire bomb the city from orbit.

Ouch this book broke my soul. I find myself hoping beyond all reason that Loken somehow lives (a space marine can survive bombs dropping on them right!). I even found myself hoping Lucius wouldn't betray Tarvitz, even though I know how the stories go. And I guess that is the sign of a good tale, even with prior knowledge of how it plays out I was still 100% sucked into the tale.

As I finish writing this I am close to completing Flight of the Esienstein so it would seem we are on the Horus Heresy train for a while. Until my next post stay safe.
Posted by Adventures with Peps at August 17, 2019