It's nice how quick and easy it is to read these. For the most part they are one shots and only take about 5 minutes to read, it actually takes longer to review! 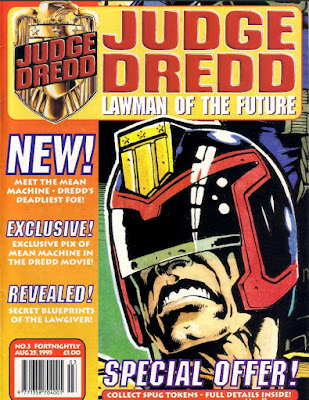 The cover is pretty standard showing a close up of the Lawman heads. It is also revealed Machine will play a role in this issue. Along side this we also get to see photographs of Mean Machine on set of the 1995 movie. Then finally we also will get to see blueprints of the Lawgiver.

Also there seems to be a special offer to do with sprogs available in this issue. I don't remember what these were but I am excited to learn more. Let's dive in. 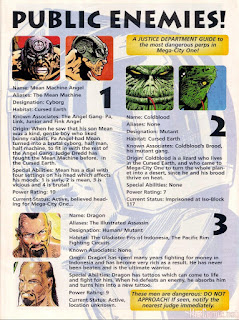 The first article we arrive at is a one pager titled Public Enemies. Seems a bit early in the series for this and includes two characters we haven't even read about or experienced let.

At number 1 is Mean Machine. The Cursed Earth desperado makes sense to hold this spot.
Number 2 - Coldblood. The Cursed Earth mutant defeated in the previous issue. I'm surprised he is here, already defeated and locked away what risk is he to the wider population?
Number 3 is the assassin Dragon. Hailing from the Pacific Rim this mysterious assassin is a mutant whose tattoos come to life to aid in attacking his victims. I know nothing about this character as we haven't seen a story let. 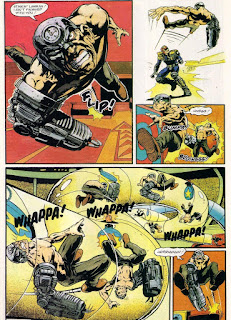 Dial mean for murder - Mean Machine Angel has managed to smuggle himself into MC-1. For a pricey sum he has promised the criminal underworld to rid them of Judge Dredd. Upon learning that Judge Dredd was on boing security, Mean heads on down to the stadium. Soon a fight breaks out on the human sized pinball table and Dredd uses the machine against Mean to become victorious.
This was a joyous tale for me as it included two of my love's from MC-1: Mean Machine Angel and Boing! I would love to experience the inside of a pinball machine from the balls viewpoint. 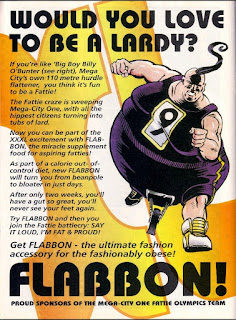 The next four pages aren't as exciting as I hoped. Up first was a mock advert for Flabbon to help you become a Fattie, followed by a two page spread of the MkII Lawgiver blueprints and finally a page about sprogs which is the game milk caps that became crazy popular in the 90's. Would love to find some of the Dredd ones.

If you have some for sale or trade let me know!

Rush Hour Part Two - Judge Dredd has boarded an out of control high speed zoom train in an attempt to stop it from crashing, but first he has to deal with the perps onboard. Once Dredd realizes there is no saving the train or station he starts evacuating the passengers via H-Wagon. But with time running out he has to act quick if he is to save the perps too.
Pretty boring ending to this one. No real standout scenes or artwork. Hence no screen grabs for this one. Let's just move on.

Up next is a two page piece on Mean Machine Angel. The first is a top ten on the comic Mean, not hugely in-depth. Then the second page is photographs from the 1995 movie with some behind the scenes knowledge. This was more interesting and I was surprised Mean wasn't more in the film considering all the work involved in the outfit. Some real moody looking pictures on this page. 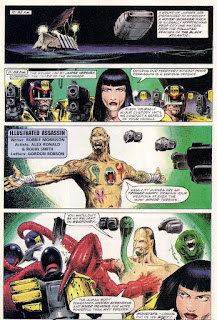 Illustrated Dragon (Part 1) - A Pacific Rim mutant has arrived in the outskirts of MC-1 and Judge Hershey and a team are sent to investigate. Onboard is a lone tattooed man, who declares himself the Dragon. In the ensuring conflict Dragon's tattoos come to life and he quickly overpowers the Judges. With Judge Hershey prisoner Dragon challenges Judge Dredd to a one on one combat. Dredd must come alone or Hershey dies.
This seems to be the tale of the comic. I'm actually excited to see where it goes. I'm expecting an epic clash for sure.

With that we have reached the end of issue three. I'm really getting into this series. It's easy to imagine this as an alt universe and forgive the uniforms. My only real negative is the lack of in-depth articles but it may change the further long we go.
Posted by Adventures with Peps at July 29, 2019