Book Review 51 // Lurker at the Threshold by H.P Lovecraft or August Derleth

Summer season is upon Ottawa. Which means two things 1- it's really bloody hot and humid, 2- I hide inside more in front of a fan.


Plus side is my reading speeds up and I can start clearing my back log. I have personally been quite lucky this summer and found a lot of H.P Lovecraft tales at the thrift store. Which means a step back from the world of Warhammer and a plunge into the Eldritch horrors of New England. Starting with the tale Lurker at the Threshold. 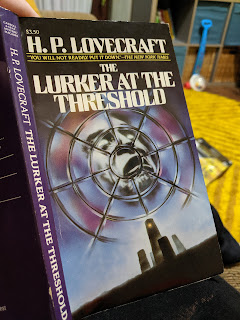 Book Details
Title: Lurker at the Threshold
Author: H.P Lovecraft // August Derleth
Type: Paperback
Page Count: 186
Commercial Fluff: Ambrose Dewart is the heir to the fortunes of his illustrious forebears. Having sampled the wide world and its pleasures, it's now time to retire to the ancestral estate deep in the rolling hills of Massachusetts. At once he sets to work refurbishing the dark rooms, clearing the cobwebs and brightening the foreboding atmosphere. That's when he stumbles upon an old document handed down from a great-grandfather of sinister reputation. On it reads the ominous injunction:
Never invite him that lurks at the threshold!
But this caution does not suppress Dewart's inquisitive spirit...not even when fantastic, ethereal powers are near at hand, striving to resume their earthly dominion...

First up let us say this is not a true piece of Lovecraft work. It was at best five percent Lovecraft's work and the rest is penned by August Derleth, his publisher following Lovecraft's death.
With that in mind we have to view this tale as expanded lore and expect a few issues. The book has it's roots set in Massachusetts, at an abandoned house close to Arkham and Dunwich. It also has the classical returning long lost son of an occult family and a cast of shadowy unhelpful co-stars.
Things start going wrong for the man when he begins exploring the grounds and rediscovering his ancestors past dealings with the locals. Soon weird dreams and noises haunt the main star and what is with the weird window in the study? The more he explores and reads up on his family past the more he plunges into madness.
Overall the book is a straight forward A to B story, with elder gods named dropped to remind us it is a Lovecraft tale but it suffers from the author's failings of not quite getting the Lovecraft vibe into tale. It feels rushed in places and the jumping between three different characters narratives causes me to lose the fear and mental distress of the main. character.
A for effort but ultimately a D- in execution.