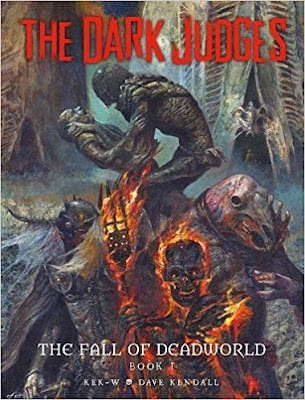 You knew I couldn't stay away from Judge Dredd for long. Well for this review we deep dive into Deadworld the home to Dark Judges- Superfiends from another dimension. The comic is in fact split in two. The first part is an origin story showing the fall of Deadworld and the second part is all about the different Judges and what makes them tick. With this in mind let us jump into the commercial fluff.

Commercial Fluff: Deadworld was once a planet similar to Earth, until Judge Death and his brothers Fear, Fire and Mortis deemed that as only the living could break the law, life itself should be a crime.  As the Dark Judges set out to bring extinction to this parallel world, Judge Fairfax and a family of farmers attempt to escape the chaos. Is it possible for the living to evade to cold, icy grasp of Death?

This chilling collection also features the Dreams of Deadworld strips, giving an extraordinary insight into the undead psyches of the internationally famous super-fiends.

Review: Starting with Fall of Deadworld we get introduced to the corruption befalling the world. The main story follows a family living in a rural farm far from the cities. They are hoping to ride out a coup happening in the capital and try to avoid the strange disease spreading throughout the land. Soon their little piece of the world collapses around them as a Judge called Fairfax comes crashing into their lives. Soon the adventure begins as we travel through the corrupted landscape, watching the Judges of this world become living dead willingly, whilst they poison the ecosystem.

This tale was beautifully drawn and the story was in thralling. I can't wait for book two. Highlight's for me was all the new lore added. We meet different Dark Judges, we discover that heads of Judges can be transplanted on to a new body and that Judge Fear seemingly is more to do with the helmet than the body.

The second half of the comic is four short tales based on each of the Judges and really shows off a great insight into their characters.

Dreams of Deadworld - Fire: Judge Fire is tasked with destroying Judge Reaper and Sister Despair who have attempted to keep some living members of the world alive to torment. During this tale we seem to discover that Fire had feelings for Sister Despair - feelings not reciprocated. To the point that Despair chooses to destroy herself than submit to Fire. The tale ends with Fire burning up Despairs mask and declaring he feels nothing. Did he become Fire due to his passion? 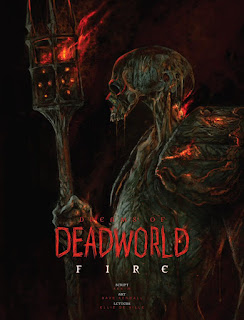 Dreams of Deadworld - Mortis: Mortis is portrayed as a gardener of sorts always watching his clock. Then one day he is visited by Aliens who crash land in his zone. Using this opportunity Mortis plays with them and discovers more will come to rescue them. Upon discovering this new Mortis rips through the aliens as adds them to his garden. Mortis seems to be the most joyful of the superfiends. 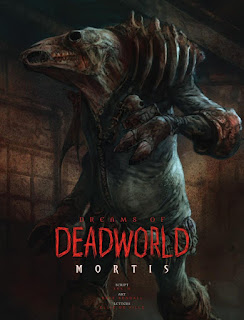 Dreams of Deadworld - Fear: The Fear tale is an instant standout due to the muted colour palette of blues and a little yellow. We start in his castle as Fear deals with his own paranoia and relives a competition between himself and Fire. During this competition Fear discovers a young boy who is not afraid of him and is forced to use physical strength to kill the boy. Fear then lies to Fire before retreating to his castle. Now Fear is full of dread knowing that possibly he will meet another who will not fear him (ie. Dredd). 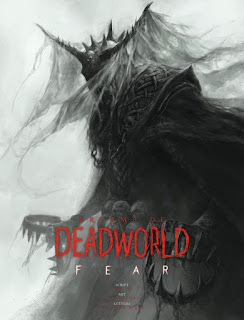 Dreams of Deadworld - Death: One of the Dark Judges (Omen) is dead and with only the Dark Judges left the pool of murders is small. So Death begins to question them collectively, soon a traitorous Judge is discovered, but they are not the murder. In fact it was Death who murdered Omen and wanted to take this moment to prove that the other Judges (beyond Fire, Fear and Mortis) are all weak and hang on to life. Which as we now know all Life is a crime. Judge Death sentences them to Death and after the Four become shielded Mortis poisons the remaining Judges. Now only four are left and they rule their silent kingdoms. 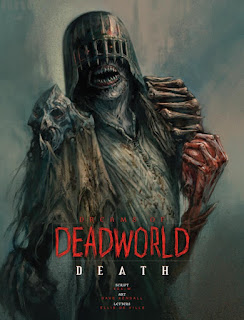