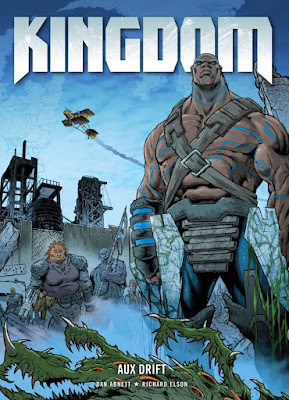 Now we hit book 3 of the Kingdom series and currently the final book available via the 2000 AD online reader. If you have been keeping up well done, if not go back and read the reviews so far. This series has actually surprised me in how much I've enjoyed it. Time to jump into Kingdom: Aux Drift.

Commercial: IT’S THE FAR FUTURE AND MANKIND HAS BEEN ALL BUT DESTROYED. The survivors hide from ‘Them’ – the giant alien bugs that have taken over the world! Only brutal genetically engineered dog-soldiers like Gene the Hackman can beat them back.

Gene now leads a new pack of mongrel Aux warriors known as the Wild Bunch where they live alongside human survivors in their settlement, ‘The Kingdom’. But the kingdom’s cracks are starting to show, while Them get meaner… and bigger!

Review: When we last left Gene he was in a sad place. Leezee Sower was gone, Gene had killed a Master and the Them are still everywhere. After exploring more of the lawn, Gene and his new group of survivors discover Aux Drift, a mining colony. What makes Aux Drift special is the fact that Humans and Aux are working together and that these humans do not refer to themselves as Masters.

The humans explain to Gene how only the powerful and wealthy could afford to become Masters and be protected by the Aux when the Them first attacked. The rest of the human race had to make do fending for themselves and hiding from the Them. This news surprises Gene who can't understand why the Masters would do that and that there is strength within the pack.

Just as everything seems to be nice and friendly a giant swarm of Them seem to start displaying more intelligence that normal. Gene heads off to find out why and discovers they have become more of a hive mind controlled by one giant bug. Knowing the only way to save his new pack is to destroy this bug, Gene teams up once more with the wild pack. Learning how to use explosives Gene and the team blow up the bug, but the outpost is destroyed. Now homeless once more the miners take Gene and his pack to their home of Kingdom. 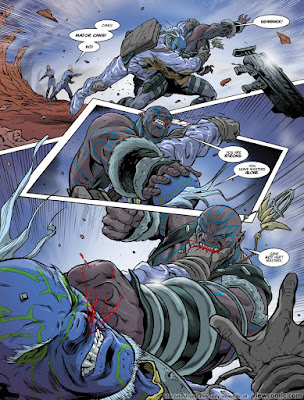 We then move into the next tale, sometime has past and Gene and Clara Bow have two sons. Just like at Aux Drift we have another horde of Them controlled by a King bug. With Gene being the biggest and strongest it falls on him to lead the mission to kill the bug.

Whilst heading out to deal with the new threat, Gene discovers Numan (the Master who took Leezee Sower to space). After finding out it is in fact due to the master's new plan that Them have evolved to have Kings. Gene enters a berserker rage and attacks Numan, but is ultimately stopped by another Aux called Major Canis (think blue Gene and your not far off). Having defeated the King bug and then been defeated Gene is loaded aboard a shuttle and shipped into space.

Great finish for now with this tale. Gene is a well rounded out character compared to book one. He has a family, he has independent thoughts, he's still a badass. I also love the fact that Them can evolve so fast to deal with threats, along with a group of Masters just chilling in space watching all this go down. I just wish the next book was out so I could continue the series. Fingers crossed it comes soon.
Posted by Adventures with Peps at June 10, 2019