Comic Review 40 // Kingdom: Call of the Wild by Dan Abnett

Coming hot on the heels of Promised Land comes Call of the Wild. Gene the Hackman and Leezee Sower have escaped the Them and are now travelling the Lawn into territory where the Them seem to not travel as much. This is Book Two of the series and sees Gene getting into more trouble than he can possibly handle. 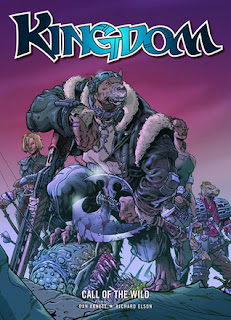 Commercial Fluff: Earth, the far-future. With the planet now overrun by gigantic alien insects, Mankind is all but extinct. Genetically engineered dog-soldier, Gene the Hackman, now protects one of the last remaining human beings – a young girl named Leezee Sower and the two of them have travelled to the land of Auxtralia, straight into the territory of a new pack. 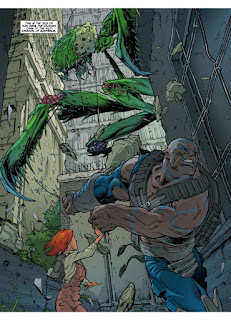 Review: An enjoyable follow up to the Promised Land. It's not fully explained but Gene amd Leezee have ended up in Auxtralia, after fleeing from the farm following the Them attack. It also seems for now the Them in Auxtralia have fallen quiet, but when the Them do appear they are huge and completely different to anything Gene has seen before (see the left). We also discover that here the Aux's are not pure anymore and are bred from many breeds of dogs, what this allows for is a freedom in the artwork and the ability to bring in some more interesting characters. I love their leader in particular.

We also get to see why the Aux came about and the early years of the war against the Them. We also see the Masters as they attempted to come up with a plan to save the human race. We are introduced to an aggressive war leaders need to win an unwinnable war and starts the Aux program. Jump forward to Gene's time and the mad War leader (now interned in a robot stasis suit) is back and he is hugely disappointed in the Aux of modern day Auxtralia and how they are nothing compared to the pure strain Gene. Soon Gene is forced to choose between the Masters and Aux and choice almost destroys Gene.

Then to make things even sadder Leezee Sower's part in Gene's story comes to an end. After discovering another human on earth, Leezee is extracted to an orbiting space station, leaving the loyal Gene alone again and wandering the lawn on his own once more.

As I said at the start, this story was enjoyable and it was interesting to discover the origin of the war. The stories artwork is on point just like the first book. Gene seems to suffer again and again in this tale, especially with the loss of Leezee. How often can Gene lose the ones he loves before he snaps? I'm sad to know there is only one more book in the current series.

Leave a comment below if you have read this tale...

Cheers
Posted by Adventures with Peps at June 03, 2019