Wow fifty book reviews. When I first restarted my blog I had no idea I would reach such numbers. I also didn't realise that Sourcery by Pratchett would be number fifty, so without further review let us dive in. 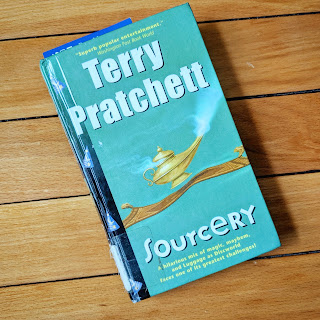 Once upon a time, there was an eighth son of an eighth son who was, of course, a wizard. As if that wasn't complicated enough, said wizard then had seven sons. And then he had an eighth son -- a wizard squared (that's all the math, really). Who of course, was a source of magic -- a sourcerer.

This was a solid fun read (as all the Discworld books are) but it wasn't my favourite in the series so far. I felt like after what seemed a strong start the story lost momentum and it's way. It had it's highlights, but it felt like this was following some pre-written plan laid down by the previous Rincewind tales and suffered from the forced humor added in. We did get to meet some great characters and locations throughout the tale and I guess not every novel can be a hit. I just wish Pratchett hadn't lost his way.

Would love to hear your thoughts if you have read this tale. Is it a hiccup in the series? Is it a case of ideas already running out for Rincewind? Where can I get a luggage? Give me your answers below and as always thanks for reading.
Posted by Adventures with Peps at June 14, 2019