I've been heavy on the Horus Heresy audio dramas so decided to take a break and hit up the Terry Pratchett drama first. Snuff is way ahead of my current reading of Pratchett and though there are small spoilers about Vimes I feel it won't really affect my enjoyment of the books. With this in mind I sat back and started to listen to the longest audiobook I have experienced so far. 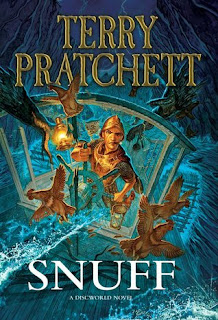 Commercial Fluff: According to the writer of the best-selling crime novel ever to have been published in the city of Ankh-Morpork, it is a truth universally acknowledged that a policeman taking a holiday would barely have had time to open his suitcase before he finds his first corpse.

And Commander Sam Vimes of the Ankh-Morpork City Watch is on holiday in the pleasant and innocent countryside, but not for him a mere body in the wardrobe. There are many, many bodies and an ancient crime more terrible than murder.

They say that in the end all sins are forgiven.

But not quite all...

Review: Snuff follows Commander Vimes (one of the more infamous disc characters). The story begins with Vimes, his wife and his son heading on a long overdue holiday. In fact it is Vime's first ever holiday and he really doesn't want to leave Ankh-Morpork. But having a dull holiday won't be a problem for Vimes as soon a murder mystery is forced upon him, as we get introduced to the Goblin Race and some classic Pratchett social commentary. The main theme of this tale seems to be about the fall out of oppressing minorities and how class systems ultimately will fail. But at the same time this is a Pratchett tale so we learn a lot of info about animal poop and how goblins collect everything from themselves in bottles (including toenail clippings).

I found Vimes to be a likeable character, who no matter what wants the disc to be a better place for everyone. I also enjoyed seeing how he brings the Goblins into the large world and I hope to read more about this race in later books (once I reach them).

I found the audio drama hugely entertaining. I was fully absorbed into the story and found myself worried for goblin characters more than for Vimes. Knowing full well Vimes would survive. I also found myself laughing out loud and loving how Goblins named themselves and spoke. Once again Terry Pratchett delivers the goods and brings a smile to my face and Tony Robinson was an excellent choice for the voice - Just Ice will forever live on in my mind.
Posted by Adventures with Peps at June 04, 2019