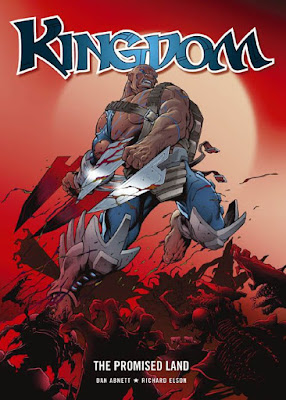 The clean up of the Laptop comic pdfs continues, this time we turn to Kingdom. Starting at book one (always a good idea) Promised Land. I've actually read a novel set in this universe before called Fiefdom, which is set after these tales. I feel it has prepared me for what is to come. For those not in know of this 2000AD series, here is a quick rundown: The Earth has been invaded by a weird insect type creatures who love to kill humans. The humans knowing they are fighting a losing war create the Aux. The Aux are a humanoid Dog Soldier designed to keep the humans alive. Now you are caught up we can jump into the review.

Kingdom is a pretty straight forward tale, it introduces the characters and then turns into an all action adventure about fighting and dieing, whilst the main character questions his role in it all. For some reason all the Aux are named after tv/movie/song personalities of the period that they were created in. The main character is Gene the Hackman who is leading his pack though the wilderness making sure the "Masters" are kept safe. We here a few terms used a lot through this story "Masters" stands for Humans their creators, "Lawn" the territory that surrounds the Masters, "Them" the invading insect creatures. 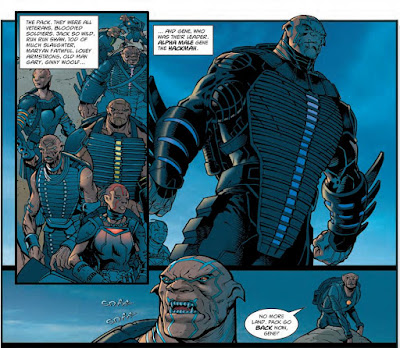 As the story progresses the pack is weaken by the fighting and then split in two when the Beta Aux challenges Gene's role as Alpha. Soon Gene is alone and left seriously confused after a random meeting with a Master. This ultimately causes Gene to go solo and wonder further than any Aux has done so before. During his adventures in the wild Gene discovers a small human farming community that is managing to hold back the tide of bugs. Here Gene meets Leezee Sower, a young girl who loves dogs. We then get a classic man and man's best friend bond building and Gene joins the community.

It's all happy families until Gene discovers a dark truth and soon the safety of the farm isn't that safe at all. Gene is forced to fight once more for survival and seeks only to protect the young Leezee Sower.

A great story with some beautiful art, the only negative I have is how the Aux talk. It can be difficult to read (at least for me). But this is really a classic Sci-fi tale told in a new and interesting way. Highly recommend it.
Posted by Adventures with Peps at May 27, 2019