Continuing with my laptop clean up we come to IDW's Anderson Psi-Division. 101 pages of Judge Anderson written for a North American market. I really hope they mess it up. 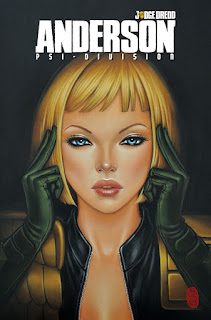 The cover is already annoying with the artists version of Anderson partly unzipped and with a standard fingers against the skull in a psychic pose (turns out there are more similar pieces with the zip getting lower and lower). Then we hit the actual tale The King of the Six Sectors and Anderson is drawn finally in a wonderful, professional way, why didn't this artist get given the cover?

The King of Sector Six starts with an Anderson's birth tale. Slightly different to the classic tellings as it follows the IDW universe rather than 2000 AD and has Anderson born during the Year One Tale, when Juves across the city became psychic. Heavily leaning into how she got her powers, jump forward 24 years and Anderson is now a PSI Judge. 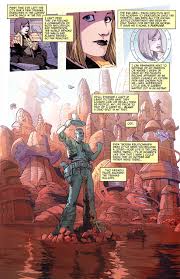 Whilst sleeping she gets a vision of a local museum coming under attack and heads over in an attempt to foil the crime. During the action a mutant PSI uses their powers to knockout everyone and everything in the block (at the cost of their own life!?). Only Anderson's unique powers are able to save her from the blast and she is left standing alone versus an armed gang of Robbers. Following a short gun fight (maybe a page and a half) most of the gang escapes, except one now dead perp. Using what little time is left Anderson is able to probe their dieing mind and realises something is up in the Alabama Morass.

Soon Anderson is headed to the Alabama Morass (a massive swamp corrupted during the atomic wars) via Texas City and has a new partner for a few pages a Texas City Judge called Degroot (kind of a cool character but their role is small so no point linger on it). During this section we get crocodile gunfights and scorpion death traps, before discovering a mutant settlement completely wiped out. As the Judge search it seems all the settlers are dead, all save one mutant child called Rami. Through this child's memories, Anderson learns of the name Ashberry and of the five men responsible for the murders of the settlers and the robbery. With this information we are soon zoomed back to MC-1 and a quick cameo by Dredd. From Dredd we learn Ashberry was somehow involved with the 2080 Juve riots. The two cases are starting to link up and it seems we may get a team up? But then out of the blue, weirdly Dredd doesn't seem to care and disappears into the city, leaving Anderson to solve this on her own. Very weird to bring him in like that and then kick him out so abruptly? 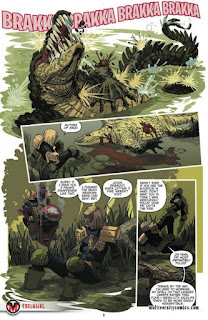 For the next little bit we discover Ashberry seems to be a ghost, a criminal boogieman of sorts. And we follow Anderson as she starts shutting down operations in Ashberry's 6 territories, hoping to flush him out. This soon brings results and Anderson is getting Ashberry's full attention with a full PSI hit squad after her. It is also revealed that Rami (the mutant child) is aiding Anderson from Texas City to help discover the whereabouts of his clansman (Poorly explained).

Now knowing Ashberry is onto her and is possibly supported by a corrupt Sector Judge, Anderson tracks down Ashberthry's lair to Tomassi Industry; a large benefactor to Justice Central specialising in Weapons, Vehicles and Defence Solutions. No wonder this guy seems untouchable!

For the final chapter we are then treated to a classic James Bond movie ending. The villain is revealed, villain does not kill the hero for no reason, villain then explains his plans, villain is caught out by the hero escaping and revenge is dealt out. The ending came way to quick and way to obviously.

Overall it lack a story you should care about and though the art was pretty, it is not enough to save the tale. A bit of flop for me.

If you read this tale. Let me know your thoughts below. Cheers for reading.
Posted by Adventures with Peps at May 20, 2019