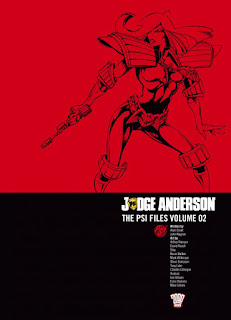 Welcome back Dreddheads for another trip into another MC-1 comic book review. This time it's all about Judge Anderson and the PSI Files Volume 2. The first volume which I reviewed earlier can be found here and is worth a read, so follow the Link. Also if you are currently not a follower please do hit follow, it makes me feel important! Now onto the review.

So without further ado lets begin like all books at the beginning. 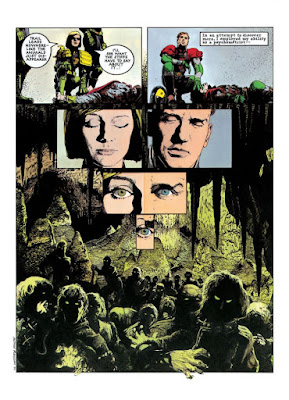 Story: Shamballa // Judge Anderson is still suffering from Cory's death (see Psi Files 01) and to make things worst Demonic black creatures are stalking the World. Only by teaming up with East Mega City Two- PSI Judges and travelling to Tibet can they hope to uncover the real truth of Shamballa.
Highlight: The artist representation of the globe in Dredd's timeline. Seeing these always helps bring the world to life. I love seeing these and getting nerdy over them.

Story: Blythe Spirit // Noel Coward Block seems to a have a spirit on the lose. Can Anderson solve the case and workout why there is a chicken?
Highlight: Judge Gittis, his complete incompetence to follow Anderson's commands, nearly gets them killed. How did he even become a Judge?

Story: Reasons to be Cheerful (Part 1) // Anderson visits the Undercity and Old New York. Her mission is to seek out the Vampire and kill him before he has a chance to breed.
Highlight: The Vampire is hiding out in a cathedral and the full page image of the Vampire dropping from the ceiling looking like a fallen angel is truly inspiring.

Story: Reasons to be Cheerful (Part 2) // Anderson stops Judge Goon from using excessive force. Convincing the citizens that he would stand trial for this. But sadly it doesn't go to Anderson's plan.
Highlight: The liberal side of Anderson coming to the foreground and how she is starting to split from the ideals of the Department of Law.

Story: The Witch? Report // Judge Anderson takes Cadet Corann and Lesley (see Volume 01) out along with Cadet Ronica. It's Halloween and were better to go then the 24 cartoon cinema.
Highlight: When Corann and Lesley combine powers to save Anderson. 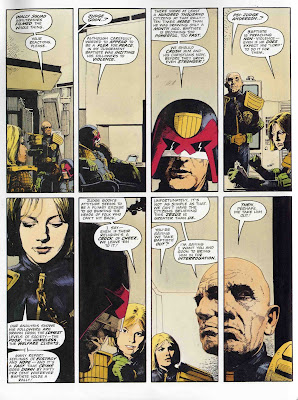 Story: The Jesus Syndrome // Jon Baptiste is gaining a massive following with his Christian revival movement. So it's up to Judge Anderson and Judge Goon to seek out the truth and find out if Jon is whom he seems to be.
Highlight: After mind probing Jon, Anderson is confronted by Goon and a fight breaks out. Anderson ultimately wins but shows how the past effects are affecting her mental well being. PSI- Chief Shenker has no choice but to suspend her from the case and reassign her to Mars to help clear her head.

Story: Childhood's End // Anderson has found religion and after striking Judge Goon during an interrogation, is sent to Mars to clear her head. Now she heads to Eden (the largest city on Mars) with thoughts of Christianity and humanity weighing on her mind. Her Mission to join a research team and travel through a portal with the hopes of finding an alien race which inhabited Mars more than 10,000 years ago.
Highlight: So many in this story. First Adam the talking chimp. And the surprise return of a familiar villain and Anderson quitting the Judges System!

Story: Voyage of the Seeker // After having her newly formed religious beliefs crushed. Anderson is searching the galaxy for answers about her soul. Can the known center of the galaxy give her the answers she seeks?
Highlight: Without a doubt the highlight of this story is the beautiful artwork by Mark Wilkinson. 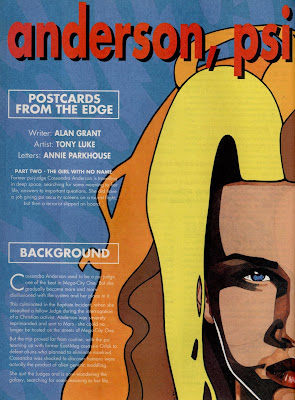 Story: Postcards from the Edge (1) // Anderson attempts to reach out to Dredd with a postcard. She's taken up a job as a starship security officer and is currently heading off to a watch a Supernova go off in space.
Highlight: The fashion of future. The main villains outfit is amazing has to be seen to be believed.

Story: Postcards from the Edge (2)// Another postcard story line, this time to Karyn. Anderson has been sacked after just one day following the Supernova trip. Jobless and money-less, Anderson attempts to find a way off the planet.
Highlight: Child of the Universe- A Biorg. A Biorg if I can get this right is a human who has given up their humanity to become one with a machine. In this story the Biorg is a Space Pilot and replaces the Space jump mechanism. Now just a head surrounded by wires she and Anderson share the joy of the Space Jump.

Story: Postcards from the Edge (3) // Anderson is lost in Space on Blassey's World and is enjoying the freedom that comes with it. Following an accidental trip, Anderson is given free tickets to a big wrestling competition.
Highlight: Towards the end of the story we find out Anderson has sent another postcard. This time to Judge Goon. Included in the message is a cheeky joke that goes along with a photo. Nice humorous ending.

Story: Postcards from the Edge (4) // Continuing on the postcard stories this time it's the turn of Coranne and Leslie. After betting on the big fight. Anderson has raised some funds and is on a passenger ship to Xxanadu. But sadly the craft has broken down. So as they wait 8 hours for a tow, the passengers amuse themselves with past stories.
Highlight: Didn't really enjoy this story. It just continued to show how Anderson is still unhappy about her life and how things might be different if we showed off our beautiful side more often.

Story: Postcards from the Edge (5) // After the Mars Mission Anderson has somehow become linked to Orlock. The downside to this is that she feels his emotions. And when she receives his invite to Zerbia she has no choice but to go.
Highlight: Seeing how the Mars mission has affected Orlock. He's no longer purely a killing machine and Orlock is now attempting to right his wrongs. I know this won't last but it's nice to see. 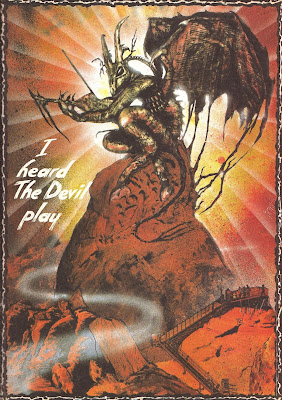 Story: Postcards from the Edge (6) // Having escaped Zerbia, Anderson now heads to Tartini-9. Where a dying Sun interacts with a statue of the Devil playing a Violin, to bring it to life once a day. Unsurprisingly this has become a tourist hot spot and with PSI powers Anderson is affected more than others.
Highlight: Having felt the affects of the Devil play, Anderson decides to give away her only way off planet, to a beggar and her child. She plans to set up camp nearby and continue to hear the Devil play.

Story: Postcards from the Edge (7) // After trapping herself on Tartini-9 Anderson Mediates by a tree and soon a crowd forms around this strange Earth woman. A local doctor introduces himself to Anderson and tells her the tale of the last witch.
Highlight: The twist in the tale and how it all links to Anderson. Don't want to spoil it so go read it.

Story: Postcards from the Edge (8) // Anderson has entered the desert to find the last witch. With the heat reaching 111 degrees this will be no easy task. What will the witch offer Anderson and what secrets might be unlocked?
Highlight: During her visions Anderson sees an Eagle being attacked by a pterodactyl which is then in turn attacked by a bat! The bat and the eagle then chase off the pterodactyl, leaving only the symbols of the Justice department, the Dark Judges and Batman.. Was this the hint at the cross over that was come?

Story: Postcard to Myself // Following the PSI vision Anderson has requested to return to the Justice system. But the return comes with a price. She has to pass some strict tests to be allowed back in.
Highlight: Dredd- He is not happy about the way Anderson left and he is definitely not happy with how she is returning. He even agrees with Goon's thoughts on the matter! Other highlight is that it's the end of the postcard series (Thank Grud).

Story: The Mind of Edward Bottlebum // Edward Bottlebum's brother Spug has committed murder and kidnapped his mother. The only way to find the mother is too find Spug. Unfortunately Spug only exists in Edward's mind.
Highlight: This is an early tale for Anderson and as such some terms hadn't been fully formed let. Like the word Grud. So it's funny to see a Judge say Thank Dok! Not sure what Dok stands for seems to close to Drokk, for me.

Story: A Fistful of Denimite // A creep has killed a night watchman and the only clue left is a scrap of his Denimite shirt. Using her special gifts Judge Anderson tracks him down to Funtazia Amusement park.
Highlight: Loving the artwork on these two earlier pieces. For me Ian Gibson summed up the Dredd world for me. Stylized black and white artwork with a crisp finish. A joy to look at. 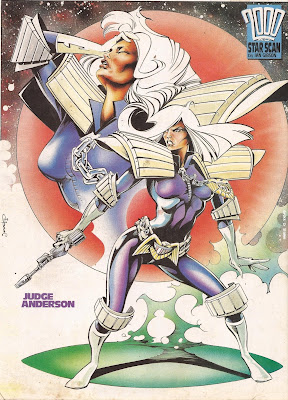 Story: Golem // A group of kids have found a spell book and out in Sector 123 wasteland they attempt to raise a Golem.
Highlight: Weirdly my highlight of the tale is a low light....Anderson's hair. Yes you read that correctly her hair. It's white! Not sure what the colourist was thinking. It made her seem older than what she is and I hope this is the only time we see it.

Story: A Soldier's Tale // Anderson gets a psi flash of a soldier intent on killing. Can she catch the prep before any really damage can be done?
Highlight: The first page for me is the highlight. As it shows a quick insight into the psi division and the different abilities that make up it's charges.

This comic was a book of two halves. The first seemed about a voyage to find happiness. Either through love or through religion. This ultimately leads to her leaving the Justice System and losing hope in her existence and her whole way of life. The second half, is all about the journey to regain lost hope and self belief in her choices. It definitely has it's highs and lows. The stories that made this volume great were Shamballa and Childhood's End; these stories really helped to build up the Anderson story line and gives her a real humanity, to play off against Dredd. The Postcard series though, left me feeling a bit deflated and I was happy when it was over.

It was good to finish the volume with a couple of short standard judging story lines as it helped to purge the postcard series from my mind. An average volume with possibly the best Anderson story, so very mixed on this.

What are your thoughts?
Posted by Adventures with Peps at May 15, 2019