Getting really into audio drama's at the moment. They are great to listen to whilst I'm at work and weirdly help me to concentrate. I have one more to listen to out of the Horus Heresy series that I own, then onto a Terry Pratchett and then I am jumping into some more Dredd audios. So keep checking on the blog (better let follow me).

Today's drama actually follows one of my favourite chapters the Imperial Fists. Chosen of the Emperor. These fine warriors have actually missed out on a lot of the fun of rebellion being stuck on Terra and in the Sol System but things are starting to change especially in this tale: 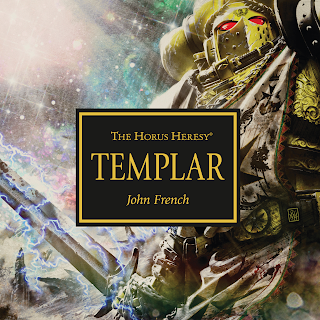 Commercial Fluff: Sigismund, First Captain of the Imperial Fists features in this Horus Heresy audio drama. Sigismund, First Captain of the Imperial Fists, is swordsman whose skill with a blade is renowned throughout the Imperium. Once a peerless duellist and champion of Rogal Dorn, he has of late earned his primarch's ire and seeks to atone. With treacherous Word Bearers abandoned by their brethren upon a comet-shrine within the Solar System itself, Sigismund calls his warriors to arms - such heretics cannot be allowed to remain upon the doorstep of holy Terra, while the Heresy rages across the galaxy.

Review: This was a great audio drama following the lesser written Imperial Fists who have been stuck most of the time in the Sol System protecting Terra. For this tale we really get to know Sigismund (First Captain and future founder of the Black Templars), as we delve into his past and his dealings with other chapters.

The duels from his past help show how Sigismund is viewed by others - White Scars believe him to be to strict and missing out on the Joy of Life, whilst the World Eater's view him as lacking passion and the will to win at any cost. I feel we are moving Sigismund towards his ultimate fate of being the Emperor's Champion for the battle of Terra. These dueling sections were the real highlights of this tale and are great background pieces. Then we actually get into the main part of the story with the appearance of the treacherous Word Bearers and Daemons (yes Daemons). Only problem at this is the feeling that the story gets rushed and the Word Bearers die to quickly.

Ultimately this is how an audio book should be. Full of interesting characters, action and made in away that really sucks you into the story. The music is on point and sound effects add to the story, just needed an extra 30 minutes. Great listen B+
Posted by Adventures with Peps at May 28, 2019