This is a two for one review today, these two tales are combined on one CD so it was very easy to blast through the two tales. With them being short tales it seemed silly to review separately. I listened to this in an afternoon at work so here are my notes. 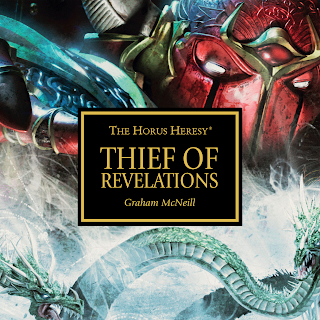 Thief of Revelation by Graham McNeill

Commercial Fluff: The Thousand Sons – a Legion whose destiny was irrevocably altered at Prospero, and yet who now seem to dance only to fate’s tune. Ahzek Ahriman and Magnus the Red cast their psychic sight over the galaxy, seeking any clue as to what the future might hold and where their true allegiance should ultimately be placed.

Review: First thing of note is that this tale follows on from Graham McNeill's novel A Thousand. Seems like he had so much fun with the novel that he felt the need to follow it up. I have read A Thousand Sons but it was a long while ago (and will be revisiting it).

This story of course has Ahriman in it, as he continues to rescue his brothers from the dreaded Flesh Change curse. Which fans of 40k know leads Ahriman down a dark path and to the infamous Rubicae action, which is now classic lore. We have Ahriman pleading with his Primarch for help in finding a cure, following another failed attempt. Most of the tale is Magus telling Ahriman that too much knowledge is dangerous and is the reason why the legion fell and was ultimately ruined by the Wolves. I feel I am missing a lot of the plot hooks here as I really need to reread A Thousand Sons. I also feel that after 35 minutes nothing has been accomplished, Ahriman just seems set to go down his dark path and Magnus has just gone full moody and emo. Could easily skip this tale and not be worried about missing out. 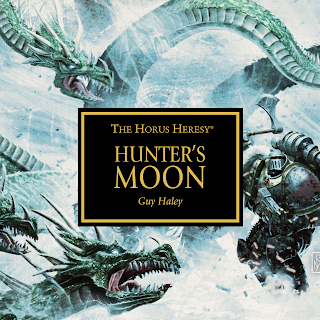 Commercial Fluff: As sanctioned executioners, the Wolves of Fenris were tasked with rooting out treachery at the heart of the Legions... but would they be capable of carrying out a death sentence upon one of the Emperor’s own sons? Now, a stolen Alpha Legion dropship crashes on the primitive oceanic world of Pelago, bringing news of a terrible war that has erupted out among the stars. Will the pursuing traitors, thirsty for vengeance, reach the lone survivor before his own battle-brothers can?

Review: Weirdly for a Horus Heresy story this tale is told by an average human on some half forgotten world that through no fault of his own gets caught in the middle of a battle between Space Wolves and Alpha Legion.

Most of the tale is leading up to the Marines and helps us to understand that most of the newly formed Imperium is completely unaware of the fact Horus has rebelled! Better let it shows that some worlds are so lacking in importance, that they need not pick a side and get to just sit back and ignore anything else happening in the larger galaxy (for better or worse).

Guy Haley makes a stunning job of creating an interesting world and an environment that is completely different to what we are use to. In this case it is an ocean heavy world, with fishing boats and sailors the main resource of this world (not much help in the void). In the short 35 minute runtime Guy manages to squash in a lot details. I feel this tale could have been longer and really could have been enthralling. I hope to read some Guy Haley heresy soon and I hope he will continue at this level for me.

Overall Hunter's Moon is the highlight tale of this disc. Full of action and intriguing story I just wish they have given them the other 35 minutes of the CD to make the tale more epic. As always let me know your thoughts below and if you preferred the Thief tale let me know what I missed and explain the plot to me please.
Posted by Adventures with Peps at May 21, 2019