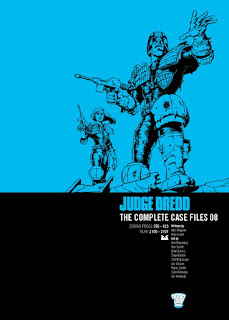 Coming in hot and fast with another comic review. I am feeling the Judge Dredd vibes once more so I am attempting to keep the rhythm going and jumping straight into the Complete Case Files 08. The tales found inside this comic are from progs 376-423 and in the Dredd timeline follow 2106 till 2107. So stop being a Drokker and jump on in!

Story: Many Unhappy Returns // C.J. Rexel is celebrating his 100th birthday when suddenly his birthday blimp is shot down killing all the guests. But who shot it down?
Highlight: After receiving a tip off from a concerned citizen about the killer, Dredd decides to investigate them too and discovers they are shop lifters.

Story: Dredd Angel // Judge Dredd is traveling into the Radlands north of Texas City and needs a guide. So who better than Mean Machine? Using hi-tech surgery the Judges rewire Mean Machine to believe Dredd is in fact his PA!
Highlight: Part of Dredd's mission is to rescue a priceless collection of Liberace relics. 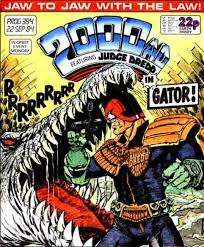 Story: Gator // Dredd is chasing two known criminals in to the MC-1 Sewer System. But no one expected to find life larger than a rat down there. Soon Dredd is chasing down the cause of the gators but with the Jimmy Tarbuck block survival club down there too will Dredd be able to save them in time?
Highlight: White Gator - Completely blind and averaging five meters long. These are a real beast and even Dredd struggles to handle them. Love the idea of these and will have to find some crocs to paint up!

Story: Question of Judgement // The annual Apocalypse Day Parade is taking place, among the crowd stands Judge Dredd talking to Judge Morph the guy who gave him his full eagle.
Highlight: Tight Boots - start questioning your judgements, in that chase start wearing a boot size smaller and your fears go away. Nice to see Dredd being a little bit human and questioning issues.

Story: Error of Judgement // Dredd is accused of assault and is facing a disciplinary hearing when he declares he is in fact guilty! Could Dredd be heading to titan?
Highlight: Dredd punching Judge Accountant Winslow in the face. Love it!

Story: A Case for Treatment // Following the last two stories it has been decided that Dredd checks out for Psychiatric Examination to determine if he is still fit to be a Judge.
Highlight: Dredd is having some real human emotions, he almost seems to be a real person rather than the cold heart Judge we know and love. Fearing Dredd is on the edge the Chief Judge reassigns Dredd to the Wally Squad! 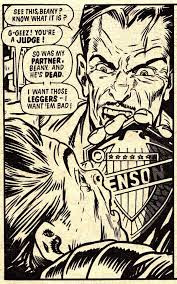 Story: The Wally Squad // When undercover Judges start acting shady a Senior Judge is called in to monitor the Judges. This time the job falls on Dredd to decide if Fast Pino and Silvan Shea have gone rogue.
Highlight: Seeing how even a Judge isn't infallible Fast Pino had been living the Low Life for so long he didn't realize he had gone native. Sad end to his career.

Story: City of the Damned // MC-1 science teams have managed to create the first time traveling machine named Proteus. Now it is "time" for Dredd and Anderson to move forward to 2120 and discover if Judge Feyy's prediction of disaster is either true or false. What they find will completely change them and MC-1 forever.
Highlight: In the future of 2120 the Judges have all become Vampires in the thrall of the Mutant including Dredd's friend Hershey. We also see Dredd losing his eyes at the hand of some lizard monsters, leading to his bionic replacements.

Story: The Hunters Club // When people get bored in MC-1 (common problem) weird groups can soon form. One such group in the Hunters Club: randomly selecting a citizen out of the directory to be hunted, this group then draw lots as to whom will kill the citizen.
Highlight: After a failed hunt, the Judges are finally moving in on the Hunters Club. But it would seem the club are aware and have measure to cover their tracks. I feel this will be a story we one day come back to. 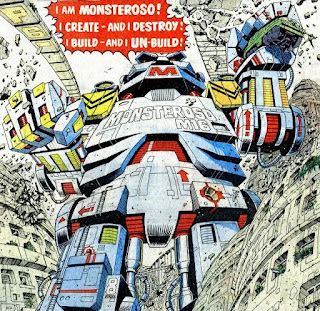 Story: Monsteroso // A Class "Big M" series construction droid has gone haywire. Now calling himself Monsteroso, the droid is now laying waste to MC-1 and can tear down even the tallest city blocks.
Highlight: Poor Judge Virgil after just avoiding being crushed under foot the heroic judge climbs on board and attempts to scale the construction droid. Unfortunately for Virgil the droid straightens it leg crushing the Judge under a knee joint.

Story: Spugbug // A bit of a filler story, with the theme being prank phone calls and the trouble they can cause. In this case death!
Highlight: Won't say there is one. Pure filler, nothing bad, just nothing stand out.

Story: Juve's Eyes // Primo and his family are new arrivals in MC-1. Unfortunately for Primo he is also a psychokinetic. It doesn't take long for the kid to start causing trouble and death a plenty.
Highlight: Primo - after dealing with the scum gang members, Primo turns his power upon himself a commits the most painful suicide I could imagine.

Story: Sunday Night Fever // Every Sunday night the Judges face Happy Hour. That time of the week when the unemployed realize they have no reason to wake up on Monday. With boredom and depression running wide these people turn to crazy life threatening activies.
Highlight: Perps in a Rhino suit. Attempting to raid a van whilst wearing Rhino outfits. Of course it does not last long for Dredd to arrive.

Story: Hagatha Smeld // Someone has killed Hagatha but they are all remaining closed mouth about it. Maybe resurrecting Hagatha might help?
Highlight: Mega-City  Necropolis the expensive resting home for the dead. This is the only way to avoid being sent to resyk.

Story: Aftermath Ron Reagan // The Dark Judges are lose and have struck the Ron Reagan block a home for the aged and infirm. With 217 dead this is going to keep Dredd busy for a while. But why is a local thug visiting the crock farm with 40 million?
Highlight: A local crime family in an attempt to escape justice, get their faces and bodies altered to blend in with the local old folks. Unfortunately for one member of the family the Dark Judges have exposed their crimes.

Story: Thirteenth Assessment // Cadet Brisco at the academy of law is undergoing the thirteenth assessment. During this test they control the actions of a senior Judge. Guess who Brisco got!
Highlight: Eldster gangs - it's not just the youth you have to watch out for in MC-1. Also seems to be an on going theme with the last few strips.

Story: Casey's Day Out // The story starts at ISO-Block 101 and Casey has just finished his 20 year sentence and is leaving a free man. Only problem is the man he attempt to kill 20 years ago has not forgot.
Highlight: After being free for only a few hours Casey decides he can't live a life under constant threat and punches Dredd, forcing the Judge to arrest him and send him back to the safety of the cubes.

Story: 99 Red // Code 99 Red means Judge Amok. Judge Sleever has snapped and attacked a citizen. Worst let he hit Dredd with his bike. Now the full Justice force is hunting down this rogue Judge.
Highlight: After being caught Sleever is off the psycho wing for some laser surgery and with luck will be back on the streets by the weeks end! 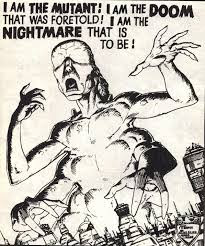 Wow bit of a weird collection this one. stand out tales include Judge Angel, Gator, wally Squad and City of the Damned. There just felt like a lot of filler combined with a lot of jumping back and forth with art styles. I also find it odd to mention Dredd questioning the system and writing it off as his bots needed to be tighter! And what gives mentioning the Dark Judges but not showing them. I want Dark Judges.

Overall an average collection.
Posted by Adventures with Peps at April 28, 2019