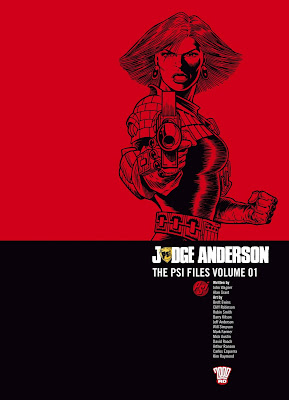 As you can tell from the above info, these stories are collected over a large period of Judge Dredd time. Whilst your reading this please keep in mind the timeline; because if we were doing the books in sequence it would slot in at around the complete case files number 7 and then into number 8.

Anderson was a fan favourite supporting character in Dredd's stories. Meaning it was only a matter of time before she got her own strip. As you will come to notice, Anderson is almost a direct opposite to Judge Dredd and shows emotion, even empathy towards victims and preps. Which makes a nice change to old Stone faces totalitarian outlook on life.

Enough intro now on to the stories.

Story: Four Dark Judges - Judge Anderson is conned into travelling back to Dead World. Were she unleashes the 4 Dark Judges. Now it's a race against time to stop them and save herself from a one way trip to Titan. Can Anderson, Judge Dredd and the Justice system stop another rampage by this this fearsome foursome?
Highlight: The Dark Judges! Can't beat the foursome on a killing spree, these are some of my favourite villains ever. Their logic though twisted is correct, crime is only committed by the living. 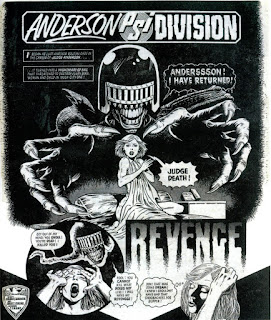 Story: The Possessed - A cult has kidnapped a Juve in hopes of opening a gateway to a demonic world. Can Anderson save the kid and close the gateway or will she have to resort to hard ass tactics.
Highlight: The Mega City cultists. I found them to have a comical presence as well as for-filling the classic horror movie get up.

Story: Hour of the Wolf - An East-Meg Psi hit squad has critically injured Anderson. Whilst the pre-cog is in medbay she is plagued by vision of a wolf destroying the city. But who is the wolf?
Highlight: There is only one really highlight of this tale, but if I tell you then it will ruin the story. I know such a lame cop out.

Story: Contact - Anderson is out in deep space and is making first contact with an alien race that can only communicate via telepathy.
Highlight: Anderson convincing a fellow Judge to believe that the aliens are in fact giant, poisonous, man eating mutant alien maggots! 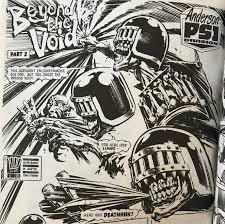 Story: Beyond the Void - Abbot Costello the great Mahatma has searched out Nirvana and crossed over into the void. But not all is as it seems and someone or something is waiting for him. Can Anderson find the monk in time to stop her arch nemesis from returning.
Highlight: That's right good old Judge Death is back and still chilling out in limbo. He adds the right mix of creepy and comedy to this tale. Whilst making sure we know that he will be back!

Story: Helios - Dr Helios is out for revenge and once more party girl Anderson is on the scene. I fine it weird how PSI Judge get free time and the ability to go clubbing. Just doesn't sit right with me.
Highlight: Mutated psi slaves full of rage and murder!

Story: Judge Corey: Leviathan's Farewell - A little Judge Corey filler. Judge Corey is an empath (unlike Anderson's Telepathy) and this causes her to feel all the pain and suffering of others around, which seem to be taking it's toll on her. Her case leads her out to sea where she meets the last of the humpback whales and psychically connects with the animal. The experience is all to much for Corey being next to the last Humpback whale as it died.
Highlight: Judge Corey, originally a sidekick for Anderson. It was nice to see her getting some love and a fuller back story, shame it was her last tale.

Story: Triad - Three Juves are all linked by their dreams, but someone is manipulating them to commit acts of psi-terror on MC-1. It falls to Anderson to work out what is really going on.
Highlight: The Blockness monster arriving in a block park lake to terrorise the residents. 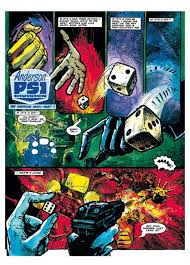 Story: The Random Man- In a city of little choice how much damage can fate and a dice cause? What would happen if you let dice decide your every move, would you follow blindly?
Highlight: The artist of this strip Carlos Ezquerra, is by far my favourite Mega-City artist.

Story: The Screaming Skull - Eb is being haunted by his past mistakes and is indeed of help. Soon Anderson is on hand but can the dead really haunt the living?
Highlight: Kalvin King- A fun underwear sales rep, mets a grisly end, but proves life is worth living especially in MC-1.

Story: Engram - Whilst out in the Cursed Earth Anderson suffers a fall and experiences a moment which will alter her future.
Highlight: Anderson reliving the past that made her into a Judge, this is a pretty dark tale to be honest and definitely not what I expected.

Story: Bonus Strip: The Haunting- Dr Levin has been possessed by the Demon Dahak. So it's now up to Anderson to go in and clean house.
Highlight: Anderson's psi image entering Levin's mind, it is just like riding a slide!

Really enjoyed the Anderson Psi Files. Having only read about her via Dredd. It's nice to see how the PSI department actually operates and runs in MC-1. I also like how they have transplanted Orlock over into her stories and making him into her long running nemesis alongside Death. I'm excited to get the next book and start reading as they are all new and fresh stories to me. So how to rate a new series and how it made me feel.....Well it's easy in this case it is fun, interesting and well rounded. This is a character that has had some time spent in it's creation, I feel they learnt from Dredd and made sure they had a realistic character to build stories from.

Until next time thanks for stopping by!
Posted by Adventures with Peps at April 20, 2019