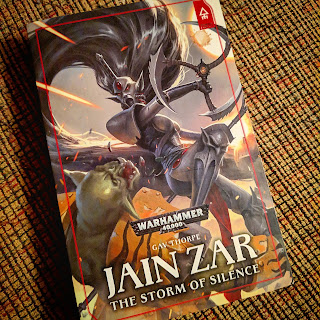 Welcome back for another book review of 2019, seven titles down so far this year! The following book was such a good I read, that I managed to finish it in four days. The fastest I have read a book ever. Why did I manage it so quickly? Well two reasons:
Let's jump in and get this post going.

The enigmatic eldar are one of the many intelligent races that battle humankind for control of the stars. Though few in number, they are an ancient race, and their mode of war blends spirituality with a unique mastery of technology. In times of need, the entire eldar race will rouse to war led by terrifying, almost mythological figures – the phoenix lords. Each different in his or her own way, these immortal beings embody the warrior nature of the eldar. Jain Zar – the Storm of Silence – was the first phoenix lord to be recruited by Asurmen, and would prove a swift and deadly fighter, able to harness the rage of her scream to slaughter any who dare oppose her. 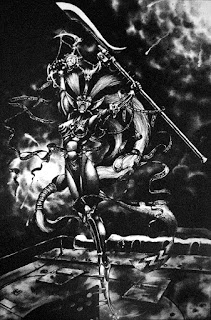 First up Jain Zar is the second novel in the Phoenix Lord Series, the First being Asurmen. It follows a similar story arc to the first book jumping back and forth in the timelines to show how Jain Zar rose to her status and how future of 40k is now being shaped by her actions. The true highlight of this story is the descriptive history sections set during the fall that have never been truly reviled, that I enjoy the most.

Just like the Asurmen novel the book is basically a read of two halfs. The first is set in the 40k timeline following the shared mission of the Phoenix Lords, what that mission is we don't truely know. But for Jain Zar's part it involves two Craftworlds and the rage filled Orks. In this section of the tale we visit the webway, Harlequins, Commorragh and the the Ulthwe Craftworld before heading to an Ork claimed world. In this timeline we meet Vect and a younger Eldard (pre-leader of the Seer Council of Ulthwe). Whilst the second half in the 30k timeline, deals with the rise of Jain Zar from a post Fall Gladiatrix to the hero of the Aeldari. Asurmen also has a role to play in this tale as we see him attempting to teach the Path to those who wish to listen. This section I loved the most, we learn about early Fall aeldari, some of the Crone worlds, we meet Maugan Ra (Pre-Phoenix Lord), planets of learning and how the society relied on AI to survive.

As with Gav's works I found it a joy to read. For me he is the true lore master for the Aeldari. He is great at designing and bringing life to their culture and I can't help but be absorbed by it. I found myself reading and reading late into the night. I have so much now to add to the Eldar Encyclopedia and so many ideas for new models and characters.
Posted by Adventures with Peps at March 16, 2019