Coming in fast from last weeks Bloodstorm review comes Book three of the Malus Series. I can't believe how quickly I am devouring these books. They are so different and fun, maybe I should try reading more anti-hero books. Here is the review for Reaper of Souls. 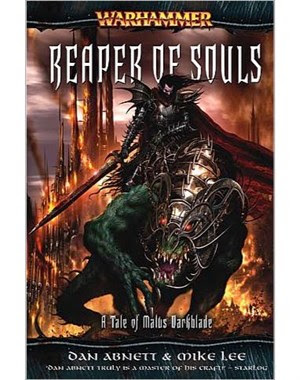 Title: Reaper of Souls
Author: Dan Abnett & Mike Lee
Publisher: Black Library
Type: Paperback
Page Count: 416
Commercial Fluff: A member of the dark elf race, Darkblade's reputation as a warrior is beyond compare and his cruelty is legendary - even by the standards of the dark elves. Having been possessed by the foul daemon Tz'arkan, Malus undertakes a perilous quest to regain five magical artefacts that will free his soul or damn him forever!

We join Malus as he is heading home to the port of Kar Karond, here in the flesh houses Malus uncovers the location in the third relic. The Dagger of Torxus is located in the city's necropolis, this long black dagger is meant to have been forged from the Outer Darkness itself and seems to absorb a victims souls! The crypt of bearer is known as Eleuril the Damned - kin killer (sounds a bit like Malus).

Upon reaching the resting place Malus is shocked to discover another group of Elves plundering the tomb. Here everything starts going wrong and an evil spirit is awoken almost killing Malus! When Malus regains his wits he discovers the guardian dead and the dagger gone. Here the novel becomes a chase as Malus must discover who has taken the dagger and get it back before it enters the city of Hag Graef. Finally catching up Malus sneaks into the camp and confronts the enemies warlord. As plan commences Malus realises it is Lurhan his father!

Having slain his father and recovered the dagger Malus is now on the run for committing patricide. Being chased by Lurhan retainers Malus has to race to the Black Ark of Naggor and hope his Uncle Balneth Bale will protect him. As always nothing really goes to plan. Heavily wounded and weaken Malus is almost sold into slavery, before it is finally revealed who he is. Seemingly accepted into the Naggor court Malus is given a military title and joins an army headed to claim Hag Graef. Here we see more sibling rivalry and the return of Nigaira. 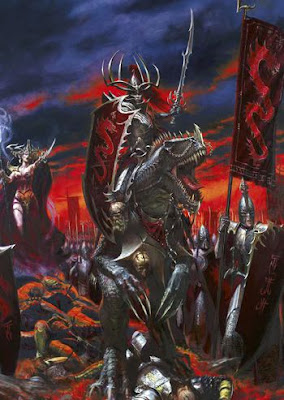 The rest of the book is one big military action, that sees Malus ultimately leading the army in a failed action to take the city. Malus also disrupts Nigaira's plans along with pissing off two cities (Hag Graef and Naggor) and has started blood fued with the Witch King. Surrounded by enemies and dangers Malus has to sneak off into the wildness in order to survive. This is a complete flip on how the last book ended.

This is by far my favorite book of the series so far. I'm excited to see how Malus can regain his status from such a low standard. I'm also amazed how much Malus sucks at killing his siblings, so far only one has died and every time they reappear they seem stronger every time whilst Malus seems weaker. I am excited for the next book.

I am going to take a small break from the series and read Gav Thorpes Jain Zar story. Then I will go back to the series.
Posted by Adventures with Peps at March 09, 2019