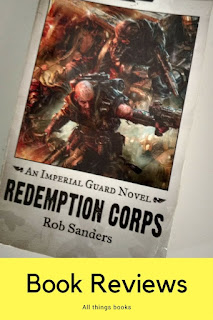 Welcome back to the bookshelf, here we are at book five of 2019. If you have been a follower of mine over my blogging attempts either on here, Instagram or Facebook, you would know I love Sci-fi, but especially 40k Sci-fi. Most of my readings have been in this dark, grim future so I have a treat for you all. This time we get to hangout in the World that was, Warhammer fantasy.

But were to start? The answer for me seemed quite simple in the end. I love Dan Abnett, I love Elves and I love an anti-hero. Here proudly steps in Malus Darkblade - the most infamous of the Dark Elves of the World that was. With about six titles to his name this will definitely become a series of reviews. I managed to pick the main books and so we will begin with Book 1- The Daemon's Curse. 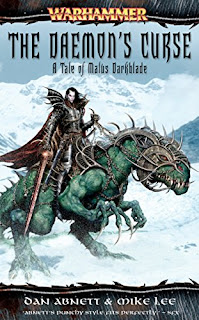 Title: The Daemon's Curse
Author: Dan Abnett & Mike Lee
Publisher: Black Library
Type: Paperback
Page Count: 414
Commercial Fluff: Ambitious dark elf warrior Malus Darkblade learns the location of a powerful relic and decides he wants it for himself. Malus leads an expedition into the dangerous Chaos Wastes in search of it but finds far more than he had bargained for. Possessed by a powerful daemon, he must undertake an epic quest to save his very soul.

First up I remember the tale from my teenage years reading the short lived comic series. I remember an anti hero, processed by a Daemon and having to collect artifacts to free himself. I remember loving the artwork and having an evil character to enjoy in my comic reading. With such fond memories it is quite shocking it has took me this long to adventure into this series.

Let's cut to the chase this book involves the Druchii (aka Dark Elves), it is also set in the Warhammer Fantasy era. These are going to be dark, very dark books. This darkness is portrayed perfectly in this opening title as we follow the ruling highborns of the Hag through ambitious political plots, treacherous ploys and just plain torture!

The opening scene shows how yearly all the Highborns of the Hag must present the Lord of the Hag some form of gift. If they ultimately fail to prove loyalty or are lacking in the right gift, the Lord is allowed to torture them or in some cases kill them. Unlucky for Malus he has neither loyalty or gifts and is tortured to the extreme. The only thing saving him is the fact that he is a bastard son of the lord.

The character of Malus is a fun one to follow and is extremely easy to like, which is weird as he is an evil villain. Born as a bastard into the ruling household Malus got the nickname Darkblade as he is seen as a flaw. Barely viewed as a Highborn, Malus has struggled throughout life. Everytime something seems to be going well one of his older siblings betray him and take the glory for themselves or revel in Malus' failures.

Soon Malus is left with very few options socially and has to team up with one of his older siblings to raid one of his other siblings (Family intrigue). After a daring raid on one of his brothers towers, Malus is on the run and being chased by warriors filled with mystical powers. His goal lays in the Chaos Wastes, here Malus will search for treasure and unknown power. From here on it becomes a book of betrayal, brutal warfare, challenges and ultimately failure and the loss of his soul to a deamon.

I really enjoyed this book. I'm a big fan of Elves in general and haven't really explored Dark Elves or Wood Elves or any Elves outside of the 40k setting (something I will try to fix). A highlight of this book is feeling the conflict within Malus. His need to take big risks in attempt to gain bigger rewards and his pure stubbornness born for the hatred for his siblings. You can't help but wish Malus would succeed for once and when he does it still seems to go wrong for him. This makes Malus a very likeable character and you end up forgiving his faults as you end up hating those around him more.

I highly recommend reading this tale. As you read this I am now starting the second book so come and check back in a week or two for an update. 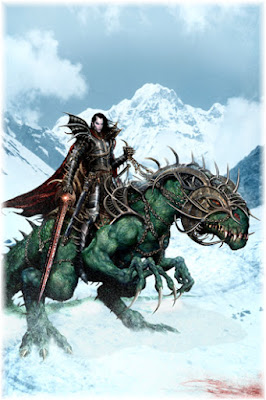 Posted by Adventures with Peps at February 17, 2019