Forty books ago I was slowly blogging about beers and Games Workshop and not much else. Then at the close of 2017 I decided to push myself and read more. What has now happened over 2018 is this blog has took on a more reading focus. More than I could have ever imagined. This I am extremely proud of and happy about. What it does mean is that I need to find a balance for all my hobbies and blogging in general. I will be trying to get more beer and mini posts going again, I also want to start being more active in the blogging atmosphere become more active on others blogs once more. With that in mind please hit me up in the comments with links to your blog and I will be sure to check them out. 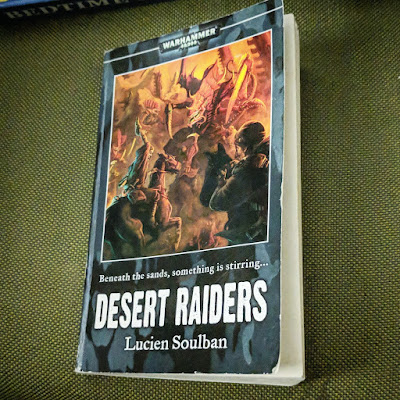 Title: Desert Raiders
Author: Lucien Soulban
Publisher: Black Library
Type: Paperback
Page Count: 245
Commercial Fluff: When an Imperial listening station receives an enigmatic call for help from a far-flung planet, a regiment of Tallarn Desert Raiders is sent to investigate. Pretty soon, the Imperial Guard find themselves locked in a desperate running battle with wave upon wave of Tyranids. Is there any way they can ever triumph against such numberless alien hordes?

First time reading a Tallarn themed book. Going in all I could imagine was the classic 2nd edition Imperial Guard models. The ones with the over the top nod to the middle east and Lawrence of Arabia, so I really had to try not to view it that way. But it would seem that was actually the theme of the army, Soulban lent heavily on Arabic culture and actually gave us a very believable Imperial Guard regiment.

Soulban allow us to see not all regiments are like the Gaunt Ghosts. This newly formed Regiment is made up of two older regiments mashed together and with that comes tribal infighting and then ultimately joining together to fight a shared foe. The first half of the book is fun and gives us an insight to a more routine Imperial Guard life, it shows us what happens when the guard are left to get on with it. The only downside to this half of the book was the huge cast list, lots of names and ranks and details to remember. Whilst the second half is action, action, action with Tyranids and death on every page (bye cast I just managed to get straighten out in my mind). I had moments of pure shock (the poor Sentinel Crews) and heartbreak (the brave 50 man holding force) and was left to the last page hoping beyond hope that the Tallarn would overcome the threat. Some things though didn't make sense to me more for a plot reasonings than anything else. 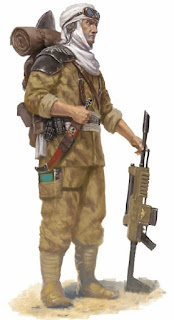 First up the Colonel, so stubborn and arrogant, the other officer had a better plan but due to being from a rival tribe he ignores it, this is crazy in my mind. No matter how much you hate someone do you risk your men's lives to prove a point? Secondly the Colonel he commits suicide towards the end due to shame, Emperor be damned this man is a waste of genetic material. How did he become the regiments leader? Thirdly the commissar. He is another waste of space, starts the book with heat stroke, fails to rally the regiment together and slaughters about twenty men to bring about a grudging peace between the tribes. I just wish the commissar had took control sooner or at least got himself fragged! Up fourth the paradise caves, for me these were a missed opportunity. This is where the Tyranids should have come from! Creepy caves full of life on a desert world....come on this screams perfect plot action!? Fifth and final issue the distress signal. The beginning and the end? Ultimately being from the psyker that actually received it. Meaning she received a message from herself in the future but wouldn't realize until time caught up. I get that time flows differently in the warp, but it is a twist that was not wanted or needed for this tale.

A solid read that I really enjoyed. I felt it had excellent pace and action. Could have used a smaller cast to play off but ultimately a good read. 4/5

Now I move back into the Horus Hersey and False Gods by Graham McNeill.
Posted by Adventures with Peps at January 27, 2019