Welcome my small collective of loyal readers. We are still in January and I have managed to complete book two of 2019! I'm of to a good start and pretty proud of myself. For my second novel I treated myself to an Aeldari themed novel. Not only does it mean I get to read about my favourite 40k race but it also means I get to add to my Aeldari Encyclopedia. But that's not all. It is also Iyanden themed so it fits exactly to the army I enjoy playing the most, making it a triple enjoyable book so let us jump straight to it! 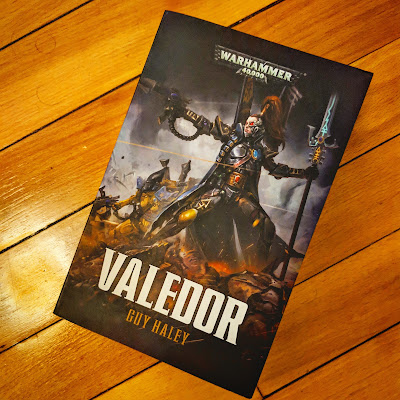 Title: Valedor
Author: Guy Haley
Publisher: Black Library
Type: Paperback
Paperback: 334
Commercial Fluff:
Long ago defiled by the Imperium of Man, the eldar maiden world of Dûriel was once a glittering jewel in the crown of the Valedor System. As the tyranids of Hive Fleet Leviathan sweep through the sector consuming everything in their path, wayward Prince Yriel of Iyanden discovers that the farseers have inadvertently brought a greater threat to bear – a fragment of Hive Fleet Kraken, hurled into the warp in order to save the craftworld, has returned. The tyranid fleets cannot be allowed to combine, or their genetic legacies will merge into something even more terrible. Alongside allied forces from Craftworld Biel-Tan and even the dark eldar of Commorragh, Yriel has no choice but to fight on to the bitter end...

Wow I really enjoyed this novel. Now I am a big fan of the Aeldari and Iyanden so it was amazing to read all about the Craftworld and the ghosthalls, but to have the doomed Prince Yriel as a main character was really the cherry on the cake. Prince Yriel is the sole reason I now collect Iyanden, ever since the Doom of Eldar board game came out I have been obsessed with the Eldritch Raiders. I even ran a Eldritch Raiders themed army back in 6th edition (mostly consisting of Storm Guardians and losing a lot). But let's get back to the book. 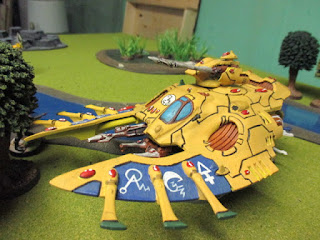 Valedor is a tale of two halves, the first is the fall out of hive fleet Krakens attack on Iyanden, whilst the second is the planetside battle to finally end Kraken's spawn. As the story unfolds it becomes clear that two different Tyranid fleets are about to merge on Valdor leading to a stronger Fleet of Tyranids - one which would ultimately doom all the galaxy. That means it is up to Farseer Taec Silvereye of Iyanden to find allies from across the Aeldari race and speed to Valedor and his doom.

This tale has a lot of well described battles and some in depth descriptions of the webway and of two Craftworlds. It was also a lot of fun to see Iyanden, Biel-tan, Cult of Strife, Kabel of the Black Heart and Harlequins of the Veiled Path all form together to tackle this problem. There is also a rather quick mention of the phoenix lords. For myself tho the chapters involving Yriel were my favourites, especially how they hint at his background, alongside his role to play in the Ynnead saga.

Overall an epic read. I really enjoyed this and would be very happy for Guy Haley to write more about Yriel and the Aeldari. But for now my mind is racing with characters to build and terrain to work on so watch this space.
Posted by Adventures with Peps at January 20, 2019